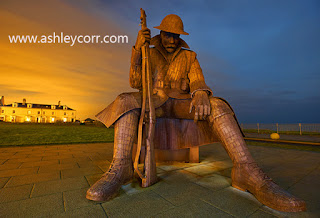 Another blog entry today - that's four in two days and that's got to be a record for me. My blog page gets neglected every now and again due to other online commitments, such as ashleycorr.com, Facebook, Twitter and more recently ... Instagram! Still finding my feet with some of those social network platforms, but I'll get there eventually. But yes, my Blog page is getting a bit of much needed TLC in the shape of another entry that brings you some of my recent images of Tommy, the very popular wartime sculpture that lives in Seaham Harbour, County Durham. I often find myself drawn to this statue and I've bagged some great shot of him recently. Visitors to my site may well have seen the page I have dedicated to Tommy. Night time visits is what captures my imagination the most and I quite often have the place to myself, unlike day time when visitors flock to see the big man. I've captured Tommy on camera many times, including the Candlelit Vigil image, which still remains my most popular Facebook upload to date, raking in more than 7,000 likes. Then there was the morning of all mornings when I photographed those amazing 'Mother Of Pearl' clouds, as a backdrop. One or two other shots spring to mind, but this blog entry concentrates on more recent night time grabs. 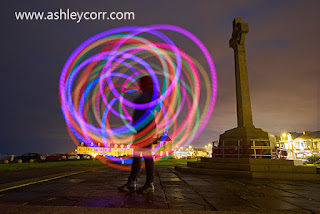 The shots you can see here were captured with two camera's - the trusty Canon 5D3 and a Sony A7S mirrorless affair, which, as the days and weeks pass, is becoming more of a primary body than the Canon. It's no surprise really, as the Sony is a master at pulling in night time shots with little or no noise, is much lighter and easy to handle, plus the manual focus is a dream to work with. I could go on and on, but less of the camera talk and more of the photographs, eh. The village green, where Tommy lives, has shops and a busy road to one side and the North Sea to the other. A cenotaph is situated a few yards away and one night I arrived to find a young girl spinning LED's to accompanying music. I politely asked if I could take a shot or two and she was more than happy to co-operate. One of the shots is shown here. 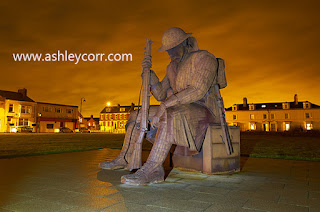 The Sony camera was shooting from almost ground level for some of my shots, with the tripod legs splayed and the centre column in a horizontal position. At best the camera was around 5 inches from the ground, which was ideal for grabbing a few shots from angles that I wouldn't normally shoot from. I think it all added to the drama and the subject suited it very well. Cars came and went, which is to be expected as the site is situated right next to a car park. Occasionally one car would pull up and face me with it's lights on. No problem really, until the driver decided to leave them on for a good ten minutes or so, ruining my shots. It was one of those 'Feck right off' moments. I bided my time and it wasn't too long before the car went on it's merry way.

Near the end of the row of shops is a fine chippery establishment. Downey's do a rather damn tasty portion of Fish n' Chips. Oh yes. Moolar handed over and it was down the hatch. Weshed down wi Coca Cola, it was time to head home with a belly full of scran. Ah well, all perks of being a wandering Mackem photographer (wink). For anyone who would like to know the background story of Tommy, here is a newspaper article (cut and pasted) to give you an insight into how the statue came to be ... 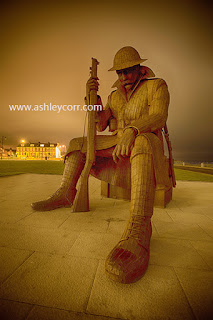 When his sculpture reflecting the sheer horror of World War One was lowered onto a seafront just a few miles from his hometown, Ray Lonsdale didn’t expect it to receive the welcome it did. The imposing metal sculpture entitled 1101 - owing to the fact the armistice went into effect at 11am on November 11, 1918 - stands 9ft 5ins tall at Seaham, in County Durham. The statue, built out of special corteen steel, was installed to mark the centenary of the start of the Great War and was only expected to remain in place for three months.
After winning the hearts of hundreds of visitors to the town, it could now be exhibited permanently. Around £72,000 has been raised to keep the 1.2-tonne statue in the town, and fundraisers are only £12,000 from their target. The Journal included it in its list of 100 great things about the North East - alongside more established landmarks like Hadrian’s Wall and the Tyne Bridge - and regular crowds are flocking to Seaham to take in the artwork. In the process, Ray’s work has been catapulted into the public eye and his journey from metal worker to fully fledged artist has been completed. He said: “There was always a big risk with Tommy because there was no sale for it. It was just a case of me biting the bullet and having hope that someone somewhere would buy it. There was no guarantee that it would have sold and it could have ended up sitting around for sometime.
“Finally great things happened and they are just about there with the money now.”
The artwork, which was installed in May has attracted hundreds of visitors to Seaham, many of whom have donated cash to the Save Tommy campaign. A Facebook page called Mission 1101 has attracted more than 4,000 members with many pledging to support to Tommy, which is situated on Terrace Green. “I was surprised by the level of support 1101 got,” said Ray. “I’ve had a positive reaction to a lot of my work but not by as many people as this. The whole town has pulled together to put money in the buckets and raise cash to keep it here. That is a new experience.”
After leaving school Ray, 49, of South Hetton in County Durham, qualified as a maintenance fitter and began working at Coles Cranes in Sunderland, which closed in 1996. Following the factory’s closure Ray set up his own steel fabrication business, where he produced bins, seats and railings for local authorities and private clients. He always had an interest in art and at school he was always encouraged to go onto to art college. 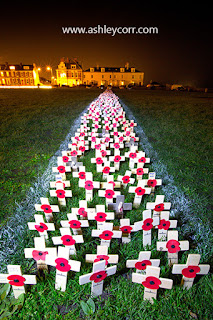 But it wasn’t until 2007 that Ray decided to start his career in art and changed the name of his business to Two Red Rubber Things. The father-of-two said: “In 2002 I got back into art and drawing on an evening and I decided to try and combine my work and interest. That’s when I produced my first piece. I got into a competition at the Biscuit Factory and I won the competition. “That gave me the confidence to try and do a bit more and over the next five years I completed more and more art work. There was a gradual change-over from steel to artistic steel work. “Someone told me that I would never stand a chance making it in the art industry unless I had a degree in art. I started college but I soon realised it wasn’t for me. “I decided to do things off my own back and that’s how I started and finally things were well received. I didn’t feel I had time to do an art degree. It would take seven years and I felt I would be wasting opportunities. I just wanted to push myself. I’m big on having a go and I never wanted to get to a point in my life where I would think ‘I wish I would have tried that. I kept the steel work going alongside the art work and it wasn’t until 2007 when I changed the name of the business and decided to take a chance with the art.”
Ray now has 30 life size statues under his belt and another six large scale pieces. These include The Big Dance at Gretna Green - a 14ft depiction of a couple’s hands - which was put in place in time for Valentine’s Day, a soldier on a bench at North Bay, Scarborough and the Filey Fisherman, in Filey. Ray, who lives with wife Bev, said: “I like to create work that people can take something from it. Public art should be for the public. I don’t agree that it is an artist’s job to educate the public about art but if they like it then it’s been a success. “I like people to look at it and appreciate it and appreciate the work that’s gone into it. I also like them to look deeper into it and find the story behind it. Previously I would make seats, bins and railings. I had to get used to people buying my work for the way it looked rather than for its functional purpose. It felt strange at first. I realised that people were having a positive reaction to my work and that’s something I got used to, which was nice.”
Ray is keeping quite tight-lipped about his next project but he admits he’s been approached by local authorities. He said: “I have completed a lot of drawings since 1101 and I’ve been approached by a couple of authorities with ideas but nothing has been finalised yet.” Leaving his full-time profession to concentrate on his dream to make it as an artist was a risk but Ray has not looked back since, citing his family’s support for helping make the leap. He said: “Bev has been fully supportive. She had a lot of faith in me when I didn’t. If it wasn’t for her I wouldn’t be any of this at all.”
Until we meet again ...
AC