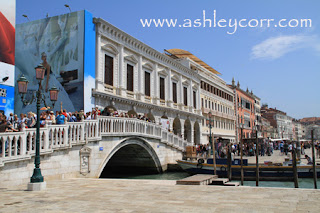 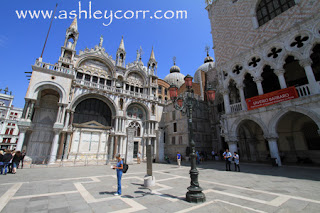 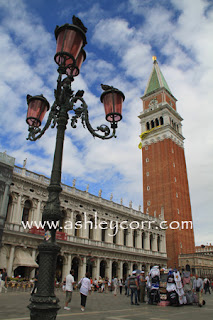 With plenty of things to catch up on I'll start with my first ever blog entry of a recent visit to a European City. 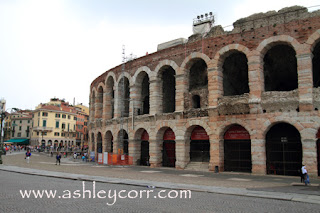 Although I've visited quite a few capital cities over the last few years I've never actually visited one since I started writing my blog. One of my favourite European cities has to be Rome, in Italy - an excellent place to visit in every aspect. At the beginning of June I visited Italy once again with my family, where we spent seven days on the Venetian Riviera, based at Lido Di Jesolo. This was an ideal base for travelling around northern Italy and my intended 'Hot Spots' for photography were Verona, Lake Garda, and top of the list...Venice. We made visits to all three, and Venice twice, where I photographed some of the places I'd missed during our first visit. We were only at Lake Garda for a couple of hours but it was well worth seeing - more on that another day. Venice was the jewel in the crown though, a place that I'll be writing about at length very soon on my blog. In the meantime, if you'd like to view my Venice slideshow on ashleycorr.com, click here and you will be taken directly to the page. More Venice photographs will be uploaded to my site next week when a new page 'Venice Revisited' will go live.

Todays blog entry concentrates on Verona, a city in Veneto, northern Italy, home to approx. 265,000 inhabitants and one of the seven provincial capitals of the region. 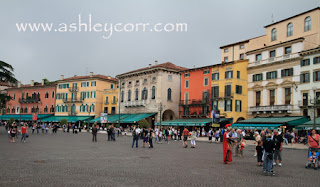 It is one of the main tourist destinations in northern Italy, thanks to its artistic heritage, several annual fairs, shows, and operas, such as the lyrical season in the Arena, the ancient amphitheatre built by the Romans. The first shot (above) shows a section of the Arena, which in the past has played host to the likes of U2, Simple Minds, REM and Coldplay, to name just a few. We spent a short time outside the Arena but never went inside, opting to press on and see what the centre of Verona had to offer instead. Arena Di Verona still remains in excellent condition today despite its age. As far as a spectacle is concerned I rate the Coliseum in Rome as a more attractive peice of architecture, although the Arena runs a close second. Having said that, I hear the interior of the Coliseum is no match for that of the Arena, which beats it hands down. Unfortunately I can't verify that - not until I make a return visit, that is. As the grey clouds hung above I headed off through the nearby park with its 'Lemon Squeezer' fountain - quite an eye-catcher! The weather was unsettled according to the forecast on my phone. It looked as though a heavy downpour of rain was imminent. Had to keep an eye on that one as we strolled through Piazza Bra in the old Roman section of the town (see photo 2). Just off the Piazza sits the Palazzo Barbieri, Verona's Town Hall that was completed in 1883.

A walk through Via Mazzini takes you to the centre of Verona which is more commonly known as Piazza Delle Erbe (photo 3). There was plenty of activity here - a large square with shops and restaurants on each side, as well as buildings of architectural interest. 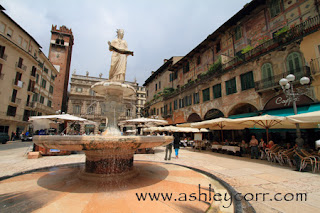 Once again a fountain took centre stage, right next to the local market stalls that were also attracting a lot of interest. The Madonna Verona Fountain was built in 1368, although the sculpture on top is much older. The building in the background is the Palazzo Mafei which was completed in 1668. Perched along the top rail are six pagan divinity sculptures - Jupiter, Mercury, Venus, Apollo, Hercules and Minerva. It is one of the few remaining baroque buildings of Verona and is currently used as a mere tourist office! In the Piazza della Erbe you will also find the Lamberti Tower standing at almost 85 metres high. You can climb it if you're fit enough, or spend a Euro and take the lift. Either way its most definately worth it for a panoramic shot of medieval Verona and beyond. Definately recommended.

Romeo, Romeo, where forth art thou Romeo?
Probably third in line behind the American and French guys getting their picture taken rubbing the right breast of Juliet's statue, he he. It's supposed to bring you luck and since she's bronze, she won't slap you! The legendary lovers famed balcony has become a must see stop for tourists visiting Verona. It doesn't matter if they were fictional characters and the balcony was built in the 1930's to provide photo seeking tourists with a photo op, it's fun to dream and imagine Juliet peering out from the balcony waiting for her lover to appear - he never does though - probably down the bookies putting a few Euro's on a nag!

Today, you can stop in the courtyard and see the statue and balcony, although the place is regularly full of tourists having a good old gander. 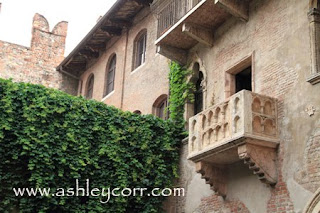 On entering the gates to the courtyard the side walls are covered in graffiti love notes, which is allowed, although you'll be hard pressed to find a blank space to join in the trend. I'm not that superstitious but my sister wrote a note asking to find a special person and that same night she met a nice guy in Venice - he took her out to an exclusive restaurant for a a pricey meal washed down with the finest Vino, before legging it out the back door, leaving HER to pick up the bill - charming eh! Juliet's house houses a small museum and temporary art exhibitions. All the frescoes, paintings, and ceramics on display are genuine antiques from the 16th and 17th century, however, none of them have ever belonged to the Capulets. Photo number 4 (shown here) is the Romeo & Juliet Balcony. What I would have given to throw a bucket of cold water from the balcony onto the dozens of tourists below, he he. Nowt against tourists mind, I was one of them, but there were screaming kids all over the place and I must have been clouted at least five times by swinging backpacks. Ah well.

And that's about it folks. Verona - a lovely place - just a pity the weather wasn't better. Again, it was one of those visits where you see only a minute fraction of what is on offer. Who knows, I might get back there one day to see more.