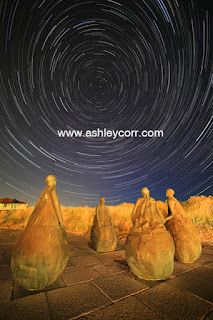 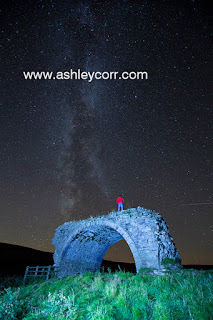 My Kingdom For A Qashqai 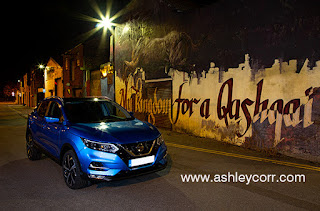 Yes, don't adjust your monitors, it really is another blog update, despite another long absence. I believe I said in an earlier post that I'd endeavour to get my shit together - well, that didn't gather much steam, did it. I can only apologise once again for an acute lack of activity on my blog page, mainly due to keeping my head above water with ashleycorr.com, my two Facebook pages, printing and framing, as well as the odd outing with my camera's. Oh, and there's the other commitments known as work and family, which are always the No.1 priority. So, let's try again. I promise to update my blog on a more regular basis in futu---------------------------CUT !!! I aint even gonna bother with that one, ha! 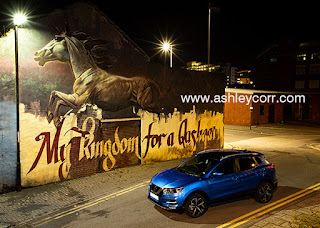 So, I'm here with a short write-up and one or two accompanying images from a recent outing, after finishing work at 11.20pm a few nights ago. Earlier that day I picked up my new Nissan Qashqai and what a motor it is. Of course, many of you will know that I work at the Nissan Car Plant in Washington, Tyne & Wear. I've been doing this for the past 27 years. Got knows how many cars I've helped to build in that time. The mind boggles. So, to get my own keys of a Sunderland built Qashqai … well, it was a nice moment, to say the least. Gone is the Vauxhall Insignia and in comes the QQ. My thought process went something like this ...While it's brand new and straight out of the box, so to speak, I think I'll head down the East End of Sunderland and park up next to some urban graffiti. I first noticed the graffiti a few months ago, when I parked up to visit the Sunderland Tall Ships. This graffiti would provide the perfect backdrop for my Qashqai, as my photographs prove. What a find!!!

Now, was it William Shakespeare who proclaimed … 'A horse, a horse, my kingdom for a horse' 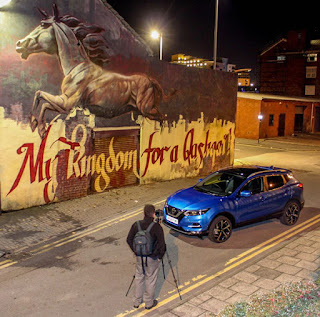 A popular quote indeed, but in this case the wording is altered by urban graffiti artist Frank Styles, as he puts a different slant on it when replacing the horse with a Qashqai. Well, we do live in motor town after all. The wording may have changed, but the horse still remains, as it gallops along at some speed - its main blowing as it ticks off the yards. Let's do it. Ignition on and car strategically placed in front of the wall art. Local scrotes walk on by at half past midnight, asking if I would like my new car discreetly removed for insurance purposes. Burnt out, I think the words were. No thanks lads, just jog on with your carrier bag full of Oranjeboom and let me tick this shoot off, eh. Cheers!

No disrespect, but the East End of Sunderland is not the best place to be in the small hours. They'd nick the steam off your shite owa there. Not all of them mind, but a good 90% of them would lol. Aye well, despite the late night visit, and a cold one at that, I may still return to photograph more graffiti that has appeared since my last visit a couple of years ago. You really need to be in and out as quick as a flash to avoid the shirt being nicked from your back. Rumour has it that one guy had his £2000 alloys wheels stolen in Hendon - he was travelling at 30mph at the time!!

And that is that. Hope you like the images above. I'm liking the new Qashqai … oh yes, I'm gonna enjoy many a photo outing in this thing, make no mistake about that one. Working at Tenko has its perks after all.

Cheers, until the next time, folks.