Mother Of Pearl Clouds - Part One 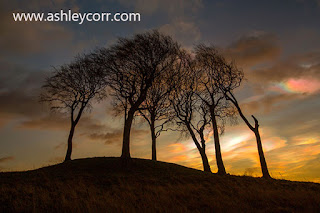 Photography is all about capturing the moment and I've been lucky enough to capture many special moments over the years. My recent interest in Aurora chasing has given me some very memorable experiences when photographing the sky, especially so near to home, which was something I never imagined possible. However, my recent sighting of rare Nacreous Clouds, also known as 'Mother Of Pearl', was something that eclipsed all of my Aurora sightings, without a doubt, so to capture it on camera was extra special and I'd like to share my experience with you, on my blog page. This rare event lasted a couple of hours at the most, but that was more than enough time to visit three locations close to home on a cold February morning in 2016. Luck was definitely on my side as the clouds appeared before and after sunrise, just as I was finishing a gruelling night shift at the Nissan Car Plant in Washington. I'd pre-planned a sunrise stop off before returning home, so my camera bag was already in the car as I left Nissan at 7.10am - good planning that gave me those precious extra minutes to grab some shots before the clouds disappeared. 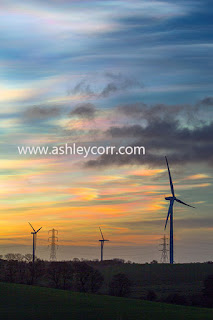 As I drove out of the Nissan works car park I could see the commotion above, with a scattering of Nacreous Clouds sitting very high in the sky. I can only describe it as an oil spill in the sky, as rainbow coloured clouds presented themselves and this was a once in a lifetime experience for me and probably for everyone else I passed on the journey out of Washington. I saw many random passers by pointing towards the clouds in amazement, who, like myself, were in awe of the spectacle in the sky. As I exited the slip road from the A1231 I headed east, towards Shiney Row. The sky was particulary light for this time of morning, which was a surprise as the morning before was very dark, even 45 minutes before sunrise. Maybe the Nacreous Clouds were to blame. As I approached the roundabout at Shiney Row I was in two minds whether to turn left and head along to Herrington Country Park, or drive straight on and make my way towards the Seven Sisters in Houghton le Spring. I was aware that it was a massive decision and one that I had to get right. The hastily arranged plan was capture the clouds with foreground interest and I wasn't confident that the Country Park would offer what was needed, so as I drove onto the roundabout I made the instant decision to drive straight on. My choice had been made and there was no turning back!!! 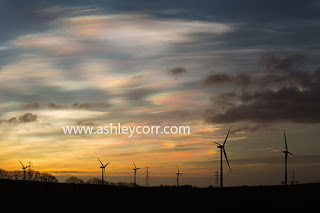 As I drove through Herrington Burn, the sight above was quite surreal. More people could be seen standing at bus stops, facing the opposite way of oncoming traffic to marvel at the rainbow clouds above. Many others drove by, seemingly oblivious to what was going on, and probably not even bothered in the slightest had someone pointed it out to them. I was soon entering God's Country (Houghton le Spring) and preparing myself for my first opportunity to photograph the Mother Of Pearl Clouds. As the clock ticked down I was mindful that the spectacle could die off at any given moment. I mean, just how long would these clouds last before disappearing? I hadn't a clue, after all, I knew absolutely nothing about them, apart from the fact that they looked immense and this was a first for me and probably a last. Time to unleash the camera. I was now parked up at the Copt Hill watering hole, in my own back yard. What a place to photograph the phenomenon above, in my own home town! I legged it across the busy road and into the field, almost gannin' arse owa tit on the muddy path. And here I was, after a long hard night shift on a high speed production line, stuck in the middle of a pasture seeing the unbelievable with my own eyes. I'd gone from one extreme to another. When I was building cars at 6.45am and blowing out of my arse on the last bit of energy I could muster, I never imagined what I 'd be experiencing just one hour later!!! That's what I love about my hobby - expect the unexpected. 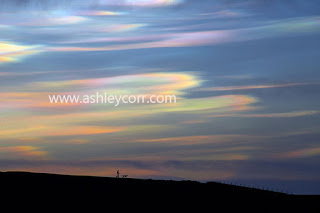 Bingo! I had made it - now on location at the Seven Sisters (Copt Hill Barrow), a Neolithical burial ground and an ideal focal point to throw into silhouette with an amazing backdrop of colour. It really doesn't come much better than this, and if it does, then I haven't been there yet. Surprisingly I had the place to myself, clicking away like the proverbial happy snapper. I was happy alright, make no mistake on that score. The wind was up and I had to press down on my tripod as I took my first batch of shots. I was shooting on relatively high shutter speeds and didn't really need the legs, but I was so engrossed in the moment that I simply carried on regardless and bagged shot after shot. I thought about jumping into the scene myself and firing off a selfie, but the winds would have surely blown the tripod over, so I back heeled the idea.

After 15 minutes or so I made the short drive along the road to a quarry entrance on the approach to High Sharpley Wind Farm. It was from this view point I could see right across to the horizon and the full show of Nacreous Clouds. This was the best yet - what a view to behold. I captured more silhouettes in the shape of the wind turbines, plus a man walking a dog along a bridleway. Good job I'd packed the long lens - a godsend! I hope you like the pictures as much I liked making them. They are shown here as Part One of my Nacreous Clouds blog entry, with the sequel coming next, featuring more shots that I captured at Seaham Harbour, home to Tommy, Mission 1101, which you know I have an affinity with through my photography. Stay tuned for that one. Coming very soon!

Thanks for visiting my blog page...
Ash