Good Evening From The Lake District!

It's been far too long. I keep slipping into 'Blog Neglect' mode and before I know it, it's been 3 months since my last entry. Oh dear, I really need to have a quiet word with myself. Not good enough, not by far. 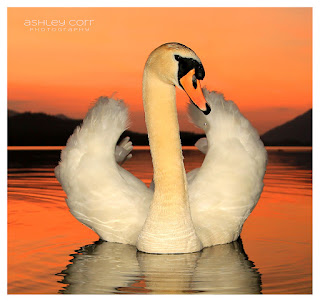 Oh well, I'm here now, so let's get on with it. A warm welcome back and a blog entry that should redeem myself and my lack of recent efforts on this page. It comes in the way of a recent visit to Lakeland - the beautiful national park we call the Lake District. It was a kind of last minute decision to head west on a Saturday evening in June, when clear skies and a possible Aurora were predicted, and the fact that the North-East region expected cloud, it was a no brainer to turn my back on the North-East and head over to the Lakes, where conditions were most favourable. It was a fine evening, with no breeze and good temperatures. I headed over the A66 and traffic was quiet, so the journey went very smoothly, until the sat-nav notified me of a closure on a section of the road, which diverted me through Kirby Stephen. Hundreds of gypsy caravans lined the approach road, and when I eventually reached the small town of Kirby Stephen, it was like a scene from a movie. The place was overrun with gypsies, gathering outside the pubs in the main street. Horses were tethered to lamp posts - lots of them. Horse drawn carts were everywhere, randomly parked by Stevie Wonder, or so it would appear. I bit of careful negotiating in the Nissan Juke had me through the other side, which came as some relief. It looked as if the place was ready to go up, as gangs of gypsies eyed the 'locals' drinking over the other side of the street. Apparently it was Appleby Horse Fair weekend - really? I thought it was the Cheltenham Gold Cup, me'sel!!!! 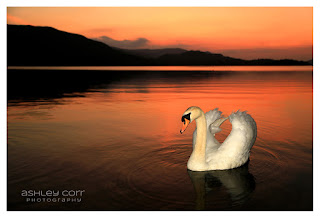 I reached Keswick as the sun disappeared over the distant fells. I drove around the edge of Derwentwater, towards Lodore Jetty, the pre-planned location for tonight's photography. As the Jetty was north facing it lined up perfectly with a possible Northern Lights show, which would hopefully arrive tonight. Before dropping anchor at Lodor, I stopped off at Kettlewell, a small car park hidden behind tree's on the edge of the lake. I had a small bag of duck food in the boot of the car, which came in very handy when I spotted a lone Mute Swan on the water. There was some nice post sunset colour in the sky, which made for a lovely backdrop across the water towards Skiddaw, the second highest of the Lakeland fells. Out came the flash gun (and the food), and away I went. A few kids came over and stood behind me as I took my first shots of the bird. They stood right behind me, which seemed to agitate the Swan for a short while, before I turned around and gave them a look that did the trick. They quickly done one. 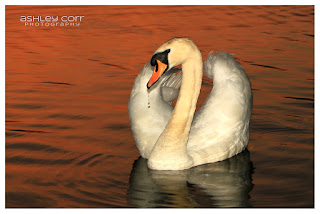 I 've got to admit - I've photographed lots of Mute Swan's, but this particular character was by far the tamest of the lot, probably due to the fact that it was accustomed to human presence and the perks that it came with it. It must have been the best fed Swan in Lakeland!!  After ten minutes or so I headed back to the car and made the short journey along the road to Lodore Jetty. It was here I bumped into Alan Cook and his wife. Alan is an amateur photographer like myself, who lives in Seaham. We often bump into each other in the dark. There's nowt going on mind - honest! Of all the places we chose to photograph - we both find ourselves at a little known jetty that we'd never previously visited - it's a small world and that was to become even more surprising as the night wore on. More about that later ... 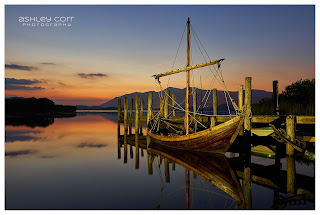 We photographed the Lodore Jetty as darkness fell, with Alan's wife doing her light painting stuff on a Viking style boat the was moored in front of us. It took a few takes before we got the results we wanted. I gave Alan a few pointers with his Sony A7r2, particularly the focus peaking, which he said he hadn't used before. It's something that I swear by, as it takes the spade work out of the equation. One thing I haven't mentioned up to now is the midgey's. NIGHTMARE! Thousands of the bastards, biting away and not the kind of thing you need when you're planning to stand at the same location all night (potentially). Seriously, this was a big problem. Mauled - that's the best way to describe it. I went twelve rounds with those tw@ts and I was on the canvas a few times... oh aye..they might be tiny but they pack a canny punch. Around 11pm a couple arrived with a camera and tripod. Me and Alan had chat with them as we took photographs. Turns out they were stopping across the way at a nearby hotel. A few minutes in and Alan headed off - he too was floored by the midgey's, while his other half took a nap on a bench nearby. Around midnight the midgey's seemed to disperse. The cooler it got, the less midgey's there was. I like that! 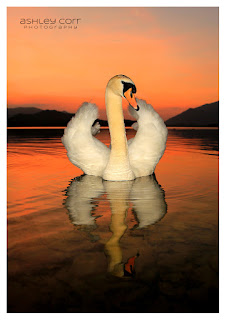 Alas, the Aurora never showed up, I chatted to Mr & Mrs Woodley about the whole Aurora thing and they asked me whether I'd seen it before. I told them I had several previous sightings, notably the last one on Mother's Day, in March of this year. They told me they'd also seen it that night, at Souter Lighthouse, near Sunderland. Well what a coincidence, that was the same spot where I had seen and photographed it! I told them this and we all laughed - it's a very small world, or so it would seem. Simon Woodley went on to say him and his wife had watched a time lapse video of that particular Aurora show in their hotel, shortly before they walked to Lodore Jetty, where we now stood. His wife said it was an amazing video and a nice reminder of a fantastic night. At this point I had a feeling that the video they were raving about was mine. His wife said 'Yeah, it was by someone called Ashley. I can't remember his second name'. I replied 'Was it Ashley Corr'... she said 'Yes, that's right - do you know him'...... I said 'That's me'. They both laughed and found it hard to believe, until I described the video in detail. They both stepped forward to shake my hand. Must admit I felt quite humbled. Simon said 'Well, well... the famous Ashley Corr' which I quickly diffused, he he. Lovely couple and I enjoyed their company in the dark. I wouldn't recognise them if I passed them in the street, Lol. 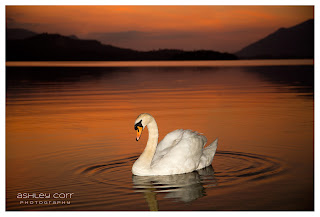 They too headed off, back to their hotel, leaving me alone to fire off a few more shots of the boat and jetty. The eerie mist moved around on the surface of Derwentwater. My last shot shows this (below). And that was that. Back to the car and off home, arriving around 5am. No Aurora shots in the bag, but without doubt my best Mute Swan shots to date were well and truly bagged. A 200 mile round trip that was well worth it in the end. Result! 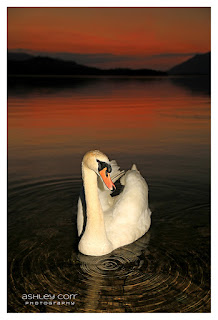 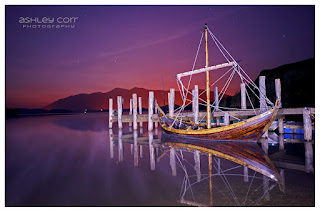