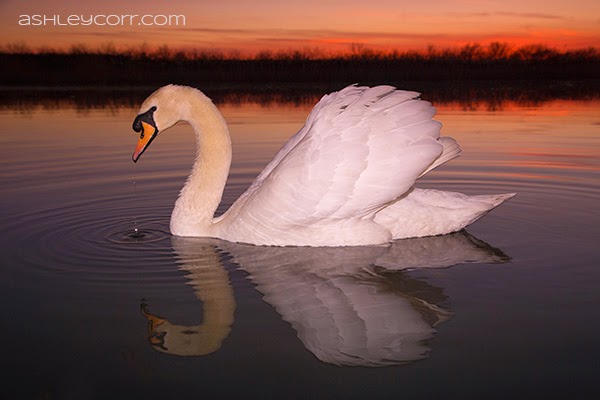 A change of direction with my latest blog entry - it's a return to some nature photography, after an absence of a few months. It's generally Springtime when I kick start my nature photography and this year is no different as the breeding season kicks in once again. And what better location to reacquaint myself with nature photography, it has to be Rainton Meadows Nature Reserve on the door step that is Houghton le Spring. It's always a challenge to capture those eye catching shots of Mute Swans at sunset, especially at this time of year when these territorial birds let you know in no uncertain terms who is boss. Get too close and you'll know about it, let there be no doubt about that. A little bit of field craft comes into play in these situations and that has developed of the years with experience in similar situations. I've got to know the tolerance levels of Mute Swans, mainly due to many visits to this locations and also by monitoring their habits and behaviour close up. I've gained a lot of knowledge after photographing these birds and have learned not to push the limits. Let them rule their habitat at all times. Do the job and then get out. 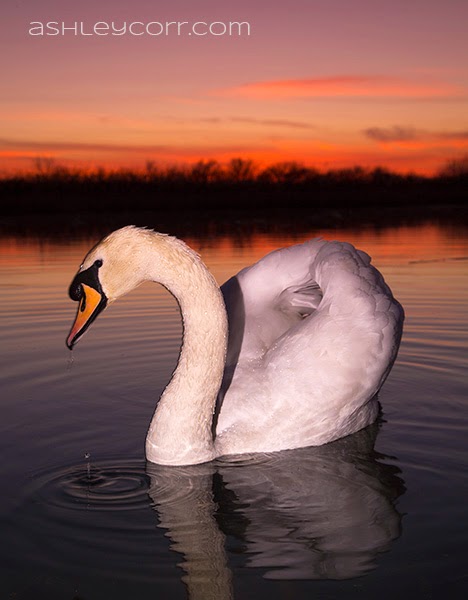 So here is my latest set of images, caught shortly after sunset on a mild March evening. The water was still and only a solitary swan on show, which was all I needed. When the sun had gone it was a brief waiting game as I prepared to take my shots with a nice colourful backdrop. And so it came and went, lasting a mere ten minutes. Only a short window to bag the shots, but it was enough. I was only a few feet away from the Cobb (male swan) as it posed for me on one of the many ponds at Rainton Meadows. It seemed more than at ease with my presence and sat contently on the water as the colour appeared in the sky behind it. I appeased the bird with the occasional food pellet, which it welcomed. Without the grub I may have been out of luck. As it was, luck was well and truly on my side on this occasion. I was chuffed with the shots. Here is 3 efforts from a batch of a dozen keepers. Hope you like them. Until the next time, stay tuned... 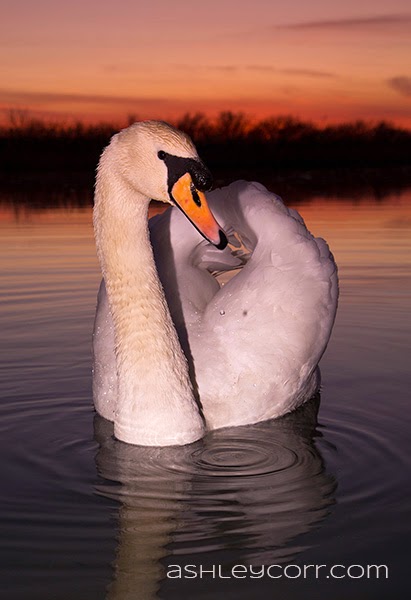 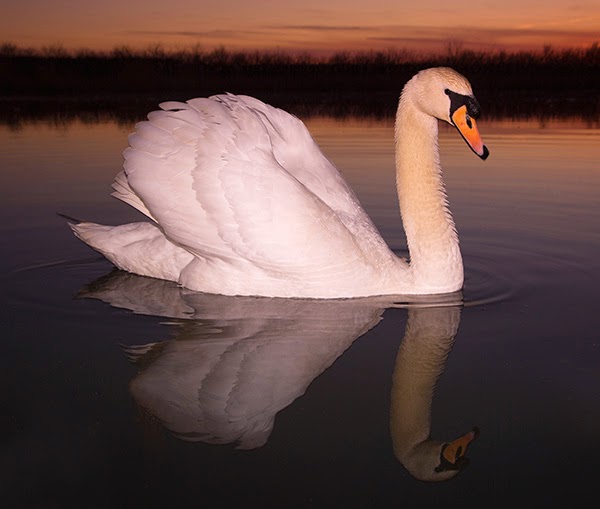 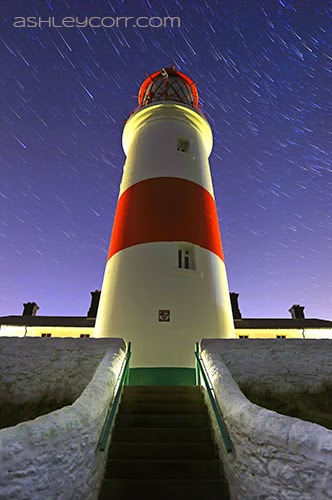 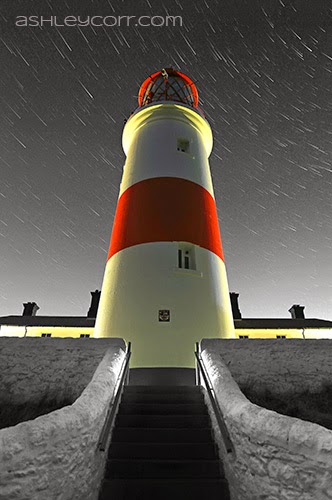 Hello again.
Miserable weather today, which is no surprise on a weekend after you've been grafting your arse off on the days leading up to it. Ah well, the camera stays in the bag and out comes the laptop. It's update time once again at ashleycorr.com. 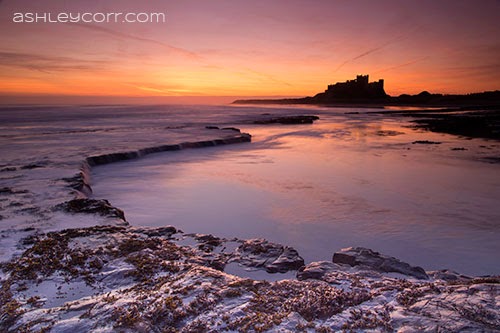 By contrast, this blog entry features some recent sunrise shots that have plenty of colour in them, unlike today's flat sky that I see out of the living room window. This Winter sunrise outing that had me travelling north up the A1 on a very cold January morning. It was a 5am alarm call that started the day. I was hopeful of a good sunrise, as I was about to begin the round trip of 130 miles. I've only done a couple of sunrises at this location and I was luck both times in the past, so three in a row would do very nicely. Sooner or later I would fall victim of the false dawn, so I had my fingers crossed that it wouldn't be on this occasion. A long way to go for a big fat nowt! One hour and fifteen minutes up the road and I was soon dropping anchor at Stag Rock, next to Bamburgh Beach. The sky looked promising, as I looked south down the beach towards Bamburgh Castle and noticed the first warm hue on the horizon. From the parked car it was literally a short walk down the sandy bank onto the beach, eventually settling for a spot near the rocks. Foreground interest was the first thing on my mind and I also observed the incoming tide so that no unnecessary soakings took place. I've had a few of them in the past and didn't wanna go back down that route, even though I was decked out in me new £12 wellies from B&Q. I don't get too bothered about getting soaked, to be honest, I'm more concerned about the camera keeping dry, especially after the kicking my old 5D2 got on the rocks at St. Mary's Lighthouse. Once bitten, and all that. 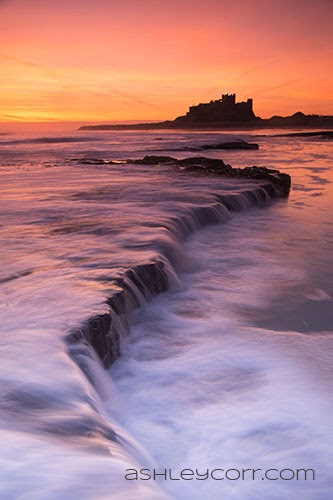 The tide offered plenty to the shots as I fired off my first few frames. The cascading water had to be the main player in the foreground. Not much point of doing a seascape with little or no water action going on. The tide did breach me wellies on more than one occasion. It was only then that I really started to feel the cold. Toes were like ice. A few of the fellow Tog brigade were positioned ahead of me but they never really got in the way, so the clone tool in Photoshop wasn't called upon for the selection of shots you see here. In fact, all three efforts are pretty much straight of camera, with only a very minor levels adjustment on each. After 15 minutes of shooting, the tide had dropped back noticeably, so with it I went, repositioning myself to include the blurred motion of the North Sea. The sun was up in no time but was obscured by the low cloud cover. After a few more minutes the magic had gone. By this time I'd already bagged the shots and was quite chuffed that it was another successful long journey. I couldn't help but notice the heart shape bubbles that drifted past on the surface of the water (shot 3). Maybe this shot should be entitled 'Love on the rocks.' 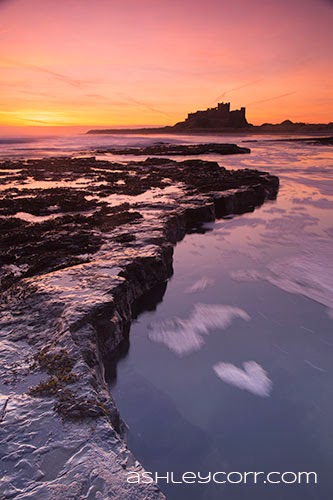 From here it was back up to the car and time for a coffee and a few chocolate biscuits. Off with the wellies and on with the heaters. Time for the journey south - job done.

Until the next time...
AC 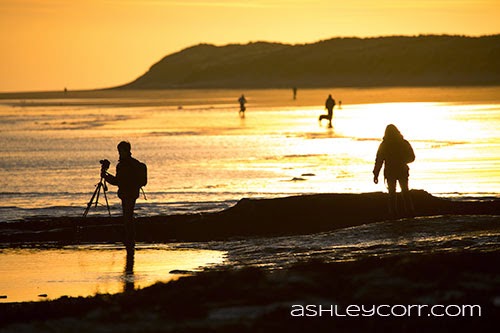