Man On The Moors - A Landscape Dream 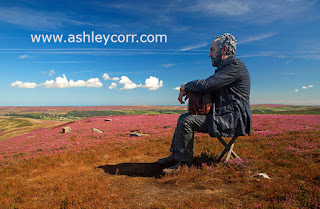 A few weeks ago I brought you all a new blog entry that covered a recent recce visit to Castleton Moor, North Yorkshire. The exact location was just outside the tiny rural town of Castleton, a place which, until now, was unknown to me. What caught my imagination was the recent unveiling of a statue, high on the moor, overlooking another tiny village called Westerdale. I wrote about the background to the statue in my recce blog, so no need to revisit the finer details, but simply to bring you the photographs from my second visit. It was a fine summer's day and definitely one for a stroll across the moors once again. This time there was no rain and wind - the heather was in full bloom and it transformed the moors into a carpet of magenta as far as the eye could see. Blue skies and broken cloud were thrown into the mix, making for some fantastic landscape shots along the way. Another climb up the slope from the car to the statue - this time I had my other half keeping me company and she was enjoying the day out every bit as much as myself. We weren't alone however. People came and went, admiring the statue and the panoramic views across the vista that lay in front of us. Barely a breeze filled the air, so to say the experience was one to behold ... well, that was no exaggeration. Not often all things considered come together, but today was one of those rare exceptions when you simply sit there, say nothing and just take it all in. The beauty and splendour was all around us. 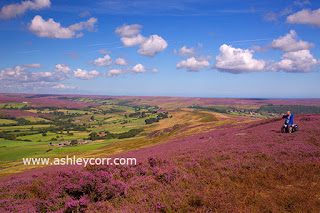 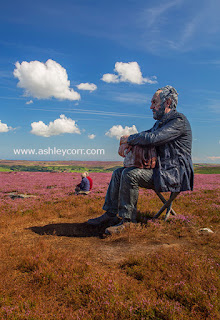 It was Saturday afternoon. The working week was behind us and weekends are meant to be exactly like this. A nice drive across the North Pennines, followed by a brisk stroll with some photography thrown in. Then another drive to a nearby pub for a well earned rest, a bar meal and a drink of real ale (That was the wife's tipple ... I was on the Babycham ... lol.) No, actually a pint of your finest John Smith's, please, bar tender. After basking in a beer garden to complete our day out, we were back in the car and heading back to the reality that is home. As far as spontaneous days out are concerned, this was up there with the best. A bit of everything. I would still be in that beer garden now had my wife not dragged me away!

And so to my next visit to the man on the moors. Yes, plans were already afoot to continue my photography of the seated man. The heather shots were now ticked off and all that remained was the small matter of bagging some astro shots. I had milky way and star trails in mind. Looking forward was again an understatement. This place was made for it and I couldn't wait to get back to Castleton Moor, under clear skies. An eye of vigilance was now in place and firmly fixed on those unpredictable weather forecast apps. Let's av it. Waiting ...

And I didn't have to wait very long! Coming next ... those astro shots of the man on the moors ...

https://www.facebook.com/ashleycorrphotography/
Posted by ASHLEY CORR at 10:18