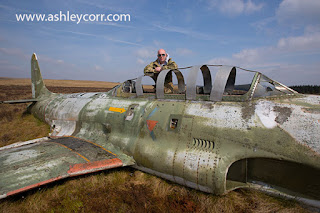 The whole attraction of blogging about my photography outings is the opportunity it gives me to document more than just photographs, but the story behind them and the 'Behind the scenes' photo's too. Today's blog entry is a perfect example of an idea I had, which was put into practise beforehand with a recce visit, which would hopefully lead to a revisit at night to photograph the stars and milky way. The whole idea came about after I saw a photograph online of an abandoned aircraft. The location was RAF Spadeadam, a military base on the outskirts of Gilsland in Cumbria, not far from Carlisle. From my home in Houghton le Spring, a round trip is in the region of 140 miles, with an each way duration of around 70 minutes in the car. Not exactly on the doorstep, but it was a location that I just had to visit, so the distance wasn't a problem at all. So, across the A69 I went, with my brother Chris, who was just as keen as I was to see the Lockheed Shooting Star, in situ on a vast wasteland. The site is accessible to the public on non-firing days, so after checking their website it was all systems go on a Bank Holiday Monday. It was indeed ... MAYDAY!!  MAYDAY!! 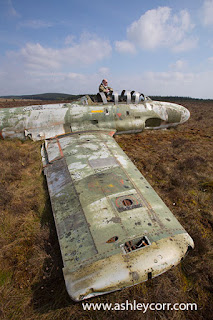 It was a nice afternoon for it, with blue sky and the odd cloud here and there. We arrived and parked up at the roadside near a field where the airframe was located. We'd heard plenty about the access route to the plane - a rather boggy field with rotten, fallen tree's everywhere. It took around 10-15 minutes to reach the plane and it wasn't without it's drama, as we dodged one pot hole after another, plus the ditches and puddles. All part of the fun though. I was only carrying my small backpack, so it wasn't too much of an effort to slug it across the field. Mind you, the plan included revisiting at night with a fully laden large backpack, so that is bound to be interesting. On arrival the plane looked remarkably sound. I wasn't expecting it to be in such good shape, especially when it had been there for over 30 years. The cockpit was stripped of all instruments. Only wires and framework remained, as well as the odd switch and name plate. Guesswork would tell me the plane was around 10 metres in length. The paintwork was in good condition, although it may well have been repainted during the years it has spent in the field. 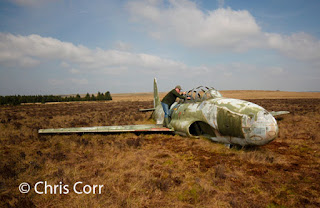 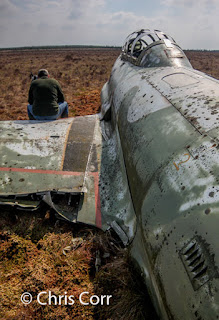 Chris climbed into the cockpit for the benefit of a photo memento or two. I set my Go Pro up on a tripod and began to capture a time lapse video of our 40 minute stay at RAF Spadeadam. It was interesting to gather as much info as I could about the site, especially as the plan was to capture as star trail, facing north towards Polaris. The orientation of the plane was perfect for this, offering a great angle of the aircraft when looking northwards. It was all good - just waiting for a clear night to put the plan into practise. I was hoping for a decent moon phase too, which would light the foreground, meaning we wouldn't have to light paint it to suit. It was time return to base and wait for a night with ideal conditions to execute the idea and pull in a nice star trail or two.

A 7 minute video of our visit can be found on YouTube if you click this link. It was shot on my GoPro in High Definition and also includes photographs and a time lapse sequence at the end. Stay tuned for the next instalment - a night time visit to Spade, under the stars! Until then, thanks for reading. 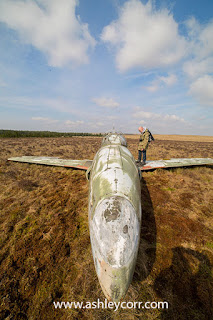 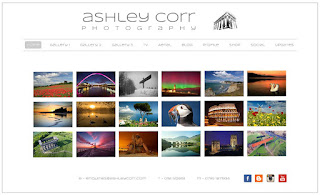 Hello again, after a rather long absence due to other commitments. One of those commitments was the painstakingly long task of revamping my website following the decision to expand the size of the pages. What should have been a fairly straightforward task became one that took many hours to complete, as the content on every single page had to be realigned to suit. I chipped away here and there, mostly during days when the weather was less than favourable, so being indoors behind the laptop kept me more than busy. Web design can be tricky, depending on what you're wanting to achieve, from the simple to the complicated. I prefer to fall somewhere in between. Since the site inception in February 2008 and a visitor count of over 250,000, I dread to think how many hours I've put into my site. It's most definitely a labour of love, there's no mistaking that and I'm quite proud of my creation considering I had no previous experience in website design. And so to the next chapter ... as ashleycorr.com prepares to go again and I now have extra time to do what I enjoy very much - getting out there with the camera.

By the way, it hasn't all been about the website. I've still been out there now and again, taking photographs. flying my drone and pulling in some nice time lapse footage with the GoPro. Yes, there's plenty of new stuff queued up and ready to unleash once I get the editing done, so stay tuned for that and much more. As the dark winter nights creep ever closer, there should be a nice balance of blog updates (and there's plenty of those in the pipeline) as well as photography outings, which should continue into 2018 and beyond. So much to do and not enough hours in the day.

Anyway, that's all for now. Just a little reminder that I still exist and with the most tedious task now behind me, it's time to go again, with the enjoyable stuff.