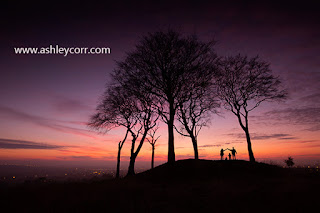 One of my favourite photography locations is Copt Hill Barrow, Houghton le Spring, Tyne & Wear. Also known locally as the Seven Sisters (although there is actually only SIX trees), this Neolithical burial ground has many urban myths attached to it, so what is fact and what is fiction - who knows? One thing is certain though, at least in my humble opinion - this place is one of the most photogenic of locations, especially during the winter months when the trees have shed their leaves and take on an eye-catching silhouette, at the top of a local wasteland in my home town. Facing east at sunset is a 'must see' - especially when you're rewarded with a colourful sunset backdrop. Not much to ask for, you might well be thinking, but surprisingly enough there has been many of them over the 16 or so years that I have been making the short journey up there. Tonight was another of those occasions.

I arrived with plenty time to prepare, which is never a bad thing. At least four other photographers were strategically placed, eager for a slice of the cake, so to speak. I made up the numbers and fancied some of that cake too, so I waited it out and hoped for the best. It didn't disappoint. I grabbed a few shots before and after sunset, by which time everyone else had cleared off and I had the place to myself. A bit of field craft and the use of a filter brought me the best shot of the night. Combine that with the sudden arrival of a family walking over the mound and the magic was about to have its second coming. They seen me from a short distance and after a brief exchange they were soon posing for my
camera. How nice! And here it is, one of my favourite shots of the Copt Hill Barrow @ sunset, with the inclusion of a family to give a nice sense of scale to the shot ...