Looking For That Cover Shot 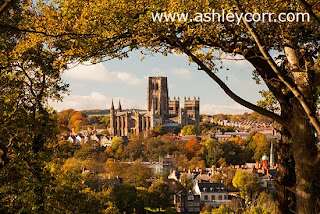 Autumn colours were on display once again as 2013 geared up to it's final season that is Winter. I only made one journey out with the camera in search of a nice Autumn shot, and that was a morning visit into the Land Of The Prince Bishops - County Durham. Although Autumn only yielded one set of shots for me, I was more than happy with the results. In fact, one of them is earmarked for a magazine cover next year, so I hope to find a taker for this one, as it's too late to expect anyone to publish an Autumn shot now, especially with the Winter mags hitting the shops in the next couple of weeks. My visit to Durham was one that I had done a little research on in the days leading up to it. I waited for a bright sunny day to capture those colours at their peak, along with a focal point that simply had to be Durham Cathedral. I found myself deep in a wooded area overlooking Durham City Centre, looking for that perfect viewpoint. In the woods I stumbled across a young Australian girl who was sitting admiring the open view in front of her. She said 'Hello' as I was about to walk past, and I stopped briefly to chat about the stunning view (of the landscape, not her). I told her I was hoping to find a nice viewpoint to photograph the Cathedral from, and she told me to keep following the path I was on, until I reached a bench down the hill. She went on to say 'Once you reach the bench you'll see it all in front of you, I'll say no more'. I was well intrigued. I thanked her and swiftly moved on, looking for the bench in question. I found it in sharp time. As for the view, here it is, absolutely spot on...

Here is my quick mock up of a magazine cover. Fingers crossed!
Ash 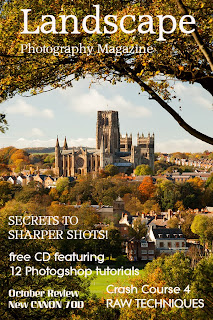 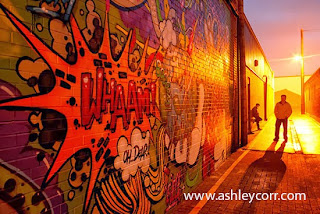 Blog entries have been few and far between lately, mainly due to me setting up a Facebook page and dedicating more time to that than this. It's a bit of a juggling act at the moment but normal service will resume fairly soon, so rest assured my blog page will return to its rightful pecking order. To be honest, I'm way behind on all things blog, so I'll have to get my arse in to gear and bring you those Summer shots from around the Med, when I visited places like Majorca, Menorca, Italy, Corsica, and Sardinia, taking in places like Rome, Venice, Naples & Amalfi Coast, Mahon, Palma and Cagliari, amongst others. Then there's the doorstep photographs - Sunderland, Seaham, Durham, etc. There's plenty of photo's queued up and they'll be here shortly. Website overhauls are dominating most of my PC time though - it'll take me many hours to revamp the pages, but I'm whipping through them at a rate of knots, with a third of them completed up to now. Only 30 more pages to go!!! 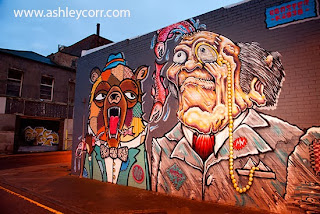 So, what's been happening lately? I've been making regular visits into Sunderland over the last month or so, as I seem to be neglecting my hometown with the camera. Time to change all that. Twilight visits into the city centre took me along Nile Street, near the East End, where a collection of street art has appeared over a short period of time. Many buildings have been transformed into a colourful montage, as well as stand alone designs like the ones below. Urban Graffiti, or Street Art, may not be everyone's cup of tea, but this lot has captured the imagination of many Sunderland folk, who have given it the 'Thumbs Up' in recent weeks. I think it's the dogs bollocks, to be quite candid. Brilliant works of art, make no mistake. And so off I went, with Chris in tow, to photograph them 'My Way'.
Here they are... 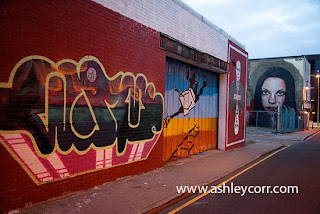 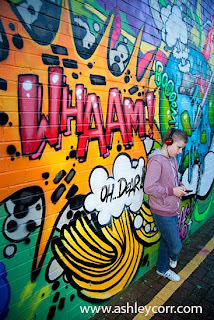 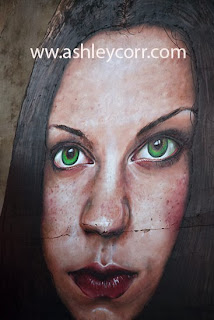 As always, click an image to view an enlarged version of it. If you like what you see and would like to view more, click here for the full 'Urban Graffiti' photo session. Until the next time...
Ash
Posted by ASHLEY CORR at 06:47