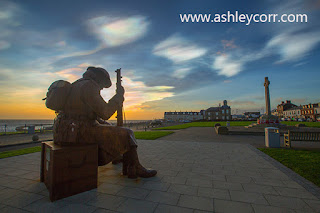 And so to the second and concluding part of 'Mother Of Pearl Clouds'. If you read the first part of my blog you'll be aware of how amazed I was to see this rare natural phenomenon, let alone photograph it. Even now, a few weeks later, I still look back in amazement at something I will probably never see again in my lifetime, so I feel priveleged to have witnessed it on my doorstep, so to speak. I apologise for not giving my readers an insight into how these clouds form, and why. So, without further ado here is a bit of cut and paste magic, courtesy of those trusty people at Wikipedia ... 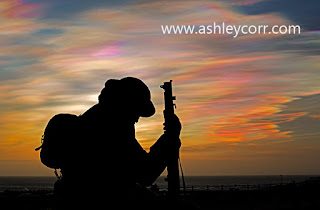 Polar stratospheric clouds or PSCs, also known as nacreous clouds, or mother of pearl, due to its iridescence), are clouds in the winter polar stratosphere at altitudes of 15,000–25,000 meters (49,000–82,000 ft). They are best observed during civil twilight when the sun is between 1 and 6 degrees below the horizon. They are implicated in the formation of ozone holes. The effects on ozone depletion arise because they support chemical reactions that produce active chlorine which catalyzes ozone destruction, and also because they remove gaseous nitric acid, perturbing nitrogen and chlorine cycles in a way which increases ozone destruction.  The stratosphere is very dry; unlike the troposphere, it rarely allows clouds to form. In the extreme cold of the polar winter, however, stratospheric clouds of different types may form, which are classified according to their physical state and chemical composition. Due to their high altitude and the curvature of the surface of the Earth, these clouds will receive sunlight from below the horizon and reflect it to the ground, shining brightly well before dawn or after dusk. 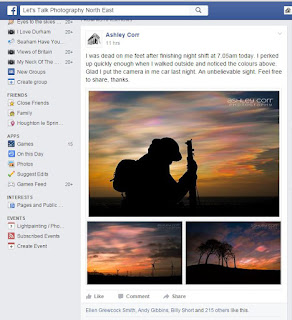 After a quick stop off at High Sharpley Wind Farm, I was back in the car and driving towards Seaham Harbour, a coastal town in the county of Durham. Within a little under ten minutes I was parked up at The Green, home of Tommy 1101, the corteen steel sculpture of a soldier, commemorating the first minute of armistice. Indeed another fine subject to use as a silhouette in front of the Nacreous Clouds. I had the place to myself, which was a surprise, so I set about the task of grabbing what would prove to be my last batch of photo's before the cloud show ended. The sun rose directly ahead of me, so I used Tommy to obscure it from view as I took my first shots. The last colours of the clouds diminished quickly as the sun rose next to them. The game was almost up. The blinding bright sun killed them off within two or three minutes, but by this time it was job done. I was more than happy to grab an hour's worth of shots, so it was time to find a petrol station, and quickly. The fuel gauge was well and truly in the red zone and me arse was twitching somewhat. Didn't fancy konking out and having to walk to the nearest station, especially as I had no idea where the nearest one was located. 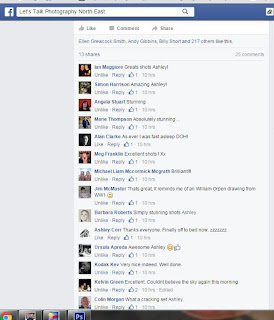 I managed to reach Morrisons at Doxford Park, filled up and got myself home. Quick cup of tea then off to bed. Well... that was the plan, but plans rarely come to fruition, and that is exactly what happened. I t was after mid-day before I eventually hit the fart sack. A press guy messaged me via Facebook, wanting to use my images on the Daily Mail website, which was a first for me, so some quick editing took place and off the images went. It was great to one of my Seven Sisters shots appear on their web page later the same day. And that was that. It was all over and well worth reflecting on. Here is a small selection of the clouds at Seaham Harbour on that memorable morning in early February, 2016. My shots went down very well on Facebook, as you can see in the screenshot here. It's always an added bonus to be able to share my work and receive nice feedback in the process. 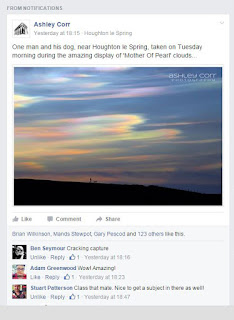 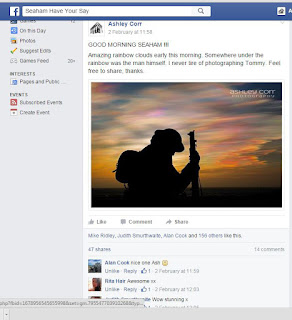