Another update to my Blog and it comes in the shape of more video clips taken from the regional weather bulletin on Tyne-Tees Television. I submitted five photographs, three of which were shown in one week during January 2012, with the remainder being shown late January/ early February. The first video player contains two of my photographs which were part of a slideshow of Winter Sunrise shots, followed by another set of Winter Scenes. My contribution was -
1. Seven Sisters Sunrise, Houghton le Spring
2. Bamburgh Castle Sunrise, Northumberland

Thanks for visiting. More website updates to follow...stay tuned.Ash
Posted by ASHLEY CORR at 13:28 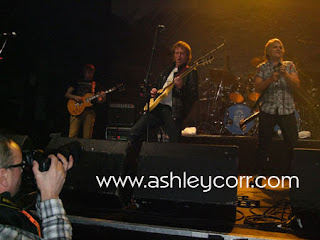 With due resepect, Tony is no singer, but he done the best he could on the night and the fans went home happy. At Legends, back in 2008, the overall sound of Big Country was inevitably hollow due to the 'Missing' guitar parts that Adamson played, but again the band improvised and done a job as well as they possibly could under the circumstances. Tonight however was a very different matter, as the band had enlisted the help of Mike Peters (lead vocalist of The Alarm) and used his vocal prowess to compliment the anthemic Big Country sound, and he fitted in perfectly. Not many could have filled the void Stuart Adamson left, but Peters is a worthy successor judging by tonights vocal performance. And remember those 'Missing' guitar parts - well they were back and so was the full BC sound, courtesy of Jamie Watson, son of lead guitarist Bruce. Jamie was earlier drafted in as a kind of experiment after practising Stuart's guitar parts with his dad over a period of months. The band attitude towards a possible inclusion of Bruce's son was 'Let's give it a go and see what happens.' Some may have seen this is a gamble, but if it was, it was one that paid off as Jamie Watson fitted into the live set-up equally as well as Mike Peters - round pegs in round holes!

Big Country were founded in Dunfermline in the 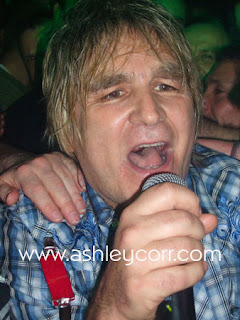 early 1980's, and another band with Scottish roots, Gun, supported them at tonights gig at the o2 Academy in Newcastle Upon Tyne. Gun weren't my cup of tea, to be honest, although they went down very well with the audience, who had turned up in large numbers and the event wasn't short of a sell-out. An hour in and I was still freezing cold - someone needed to hoy 50p in the gas meter to pump some well needed hot air into the place. It was -2 degrees outside yet it felt even colder inside the venue, but it didn't take long to warm up once Big Country took to the stage. The band received a huge welcome from the crowd as they started their set with a track called Angle Park. The place was soon bouncing - we were lucky to get places at the front so I was in confident mood of grabbing some decent live shots, taken with a modest Fuji F60 'Point and Shoot' affair. The band played their 1982 album 'The Crossing' in its entirety, to mark 30 years Anniversary of its release. The set list on the night was as follows...

From the freezing cold to the hot and sweating - the fast tempo of the music, coupled with a crowd paked in like sardines and bouncing about to the music, we soon warmed up. Highlights of the gig were as follows...

Mike Peters vanishing from the stage, eventually emerging at the rear of house, perched on someones shoulders and singing the 1983 hit 'Chance', much to the pleasure of the surrounding fans. As he made his way to the front of the audience he was helped over the barrier right next to us by security staff. I grabbed a shot of him at close quarters (second shot, above).
During one of the encores 'Tracks Of My Tears' Mike Peters altered some of the lines in respect of Stuart Adamson...'Since you left us, if you see me with another band, Looks like I'm having fun. Although I might be cute, I'm just a subsitute, cos you're the permanent one (Mike points skywards).
Another highlight (literally) was again centred around frontman Mike Peters as he turned his acoustic guitar to reveal a mirrored back, before pointing it towards the audience and reflecting 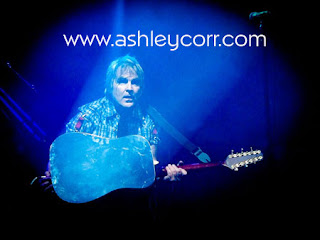 the light from the rigging above onto the crowd in a 'Search Light' effect. It worked very well, easily reaching the seated audience on the balcony, as well as those at the back of the stalls. I can't remember off hand which song was playing at the time, but it covered atleast two minutes of instrumental as Mike's 'Search Light' flashed past most of the audience. I managed to grab the effect with my humble Fuji, shown here in my third shot.

I could ramble on, but I'll be here all night if I do. Enough said then. A great show - looking forward to seeing them again sometime. I hope BC can hang on to Mike Peters though. He's been getting rave reviews on The New Big Country Website for his performances on this tour so far. Bruce Watson, Tony Butler and Mark Brzezicki played their part as usual, leaving their fans with the feeling that there's still plenty left in the tank.
That's is all, until the next time,
Ash
Posted by ASHLEY CORR at 02:40