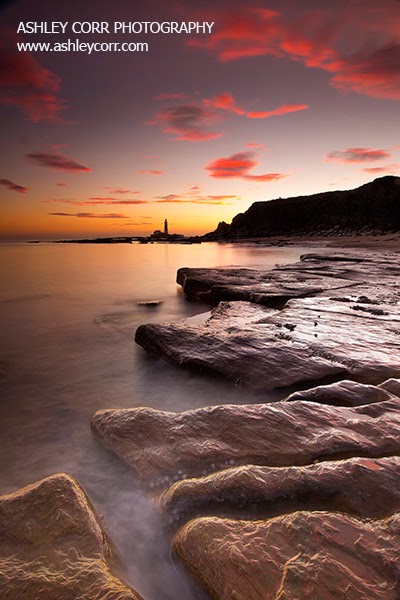 The Christmas holiday period presented opportunities for me to capture sunrises on the North-East coast, so I ventured out to new territory to do exactly that, and as a result it proved a very wise move. St Mary's Lighthouse, just north of Whitley Bay, has been a fairly regular haunt of mine of the last few years, particularly at sunrise, and although I've had my fair share of false dawns during this time, I've been lucky to capture one or two cracking red skies before the sun rose over the North Sea. It's pot luck, to be honest, but you've got to be in it to win it, as someone once said. The law of averages would give a firm impression that from six visits you are likely to see between one and two good sunrises, and by this I'm expecting good colour and cloud formation, as well as seeing the sun as it rises on the horizon. Low cloud cover often scuppers this.

And so, to my first ever visit to Old Hartley, a small bay between St Mary's Island and Seaton Sluice. A short walk from the small car park on the cliff top led me towards the steep concrete steps where I gained access to the beach. Not a great deal of sand to be had, as rock formation covered the majority of the bay. And if it's good rock formation you're after for detailed foreground interest, it doesn't come much better than this. By the time I arrived the tide was on its way back in and around half way. Because of this I was able to get out and explore the flat table of rocks to my left, which stretched out quite far and despite the incoming tide there it was safe enough to spend some time out there without being cut off. A couple of photographers appeared shortly after I had set my gear up. There was also one or two silhouetted figures on the cliff tops, crouched behind tripods and waiting for the sun to show up. 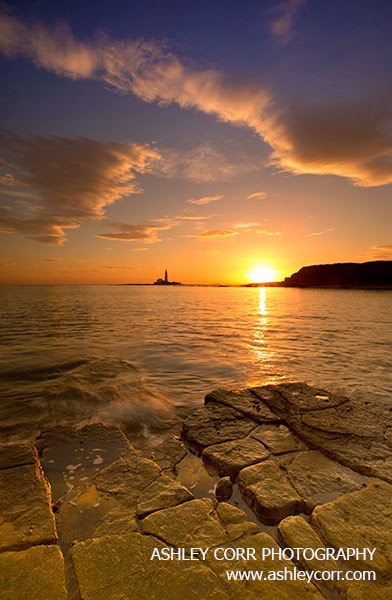 A warm yellow glow on the horizon behind the lighthouse was enough to get my firing off my first shots. At this point I could tell it was going to be a productive morning and the best was yet to come. As sunrise drew ever closer the colours in the sky were continually changing, especially 5-10 minutes before sun up when a nice pink/red hue took over the clouds. And it wasn't long before the sun made its appearance. At this point I headed out onto the flat rocks to get a better view of it. I was mindful of the incoming tide and made a decision to keep things brief. I'd been at Old Hartley for a good 90 minutes and pulled in some nice shots, especially the first half dozen efforts of the morning. I imagine this place will be a regular haunt in future and I look forward to photographing the same location later in the year when the sun rises further north. I'll keep you posted on any developments.
Hope you like these shots...
Cheers, Ash 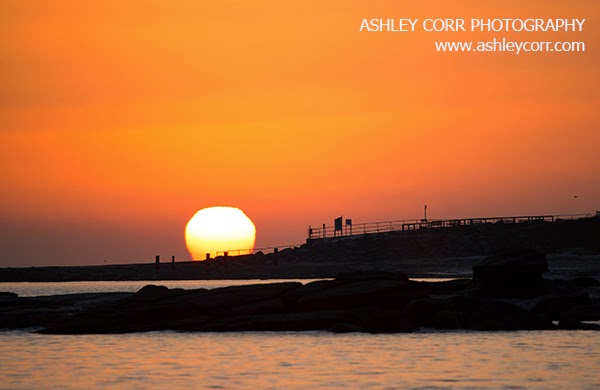 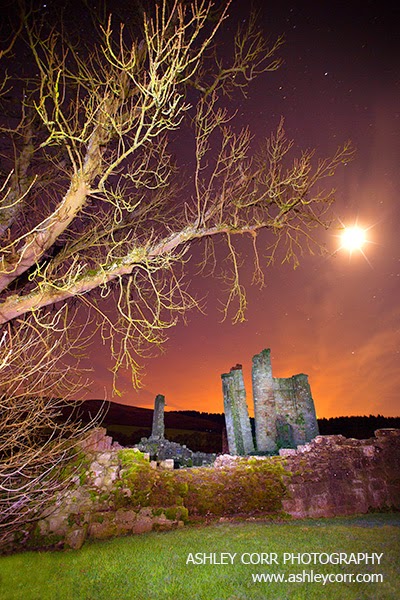 A first time visit to this location, at night, in the sticks, to have another bash at some Astro Photography. Arriving past dusk in almost pitch darkness, it was helpful in one way that an almost full moon was visible, although we weren't entirely sure how this would impact on the photographs we were about to take. A quick visual of this small site was enough to set up the camera near a large tree, just inside the main gate. Overhanging branches caught my eye immediately and this made for good top half interest, with the ruins sitting underneath. My first shot was right in front of me and the moon added that extra bit of atmosphere to it, so it wasn't long before the shutter was at work. The foreground ruins were lit by torch and the occasional bounce flash. Here is the first shot of the evening, taken around 6.30pm.

Before I continue I'd like to give you a brief history of Edlingham Castle, cut and pasted from the trusty Wikipedia page. It don't half come in handy!

Edlingham Castle is a small castle ruin, having Scheduled Ancient Monument and Grade I listed building status, in the care of English Heritage, in a valley to the west of Alnwick, Northumberland, England. It has been described as "One of the most interesting in the county", by Nikolaus Pevsner, the architectural historian. Edlingham itself is little more than a hamlet with a church alongside the castle. The ruins are mostly laid low though much of the solar tower still stands despite an impressive crack running several stories down to ground level. The foundations and part of the walls of the hall house, gatehouse, barbican and other courtyard buildings are still visible, most dating from the 16th century. The castle - more properly a fortified manor house typical of many medieval houses in the North of England - guards one of the few approaches to Alnwick through the hills to its west. Its fortifications were increased in response to the border warfare which raged between England and Scotland in the period from about 1300 to 1600. 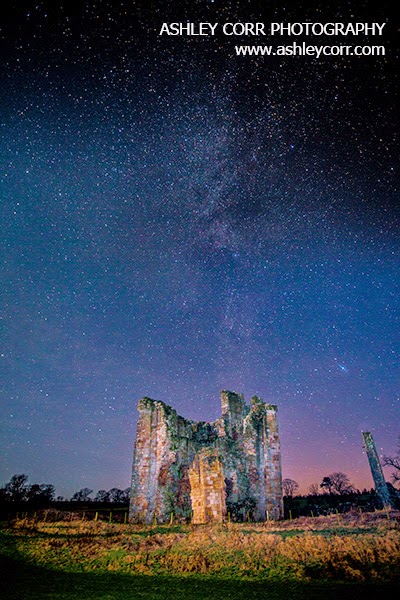 By 1174, a manor house at the location was in the possession of a John of Edlingham. In 1294, a descendant, Walter of Edlingham sold it to William de Felton, who strengthened it by building strong ramparts and a gatehouse, fortifying the main hall and adding other buildings inside a courtyard. In 1396 Elizabeth de Felton inherited it, marrying Sir Edmund Hastings, who added a strong solar tower. Their descendants occupied the castle and estate until 1514; it was then it was purchased by George Swinburne; a constable of Prudhoe, whose family held it until the 18th century. During this time it gradually fell into disrepair, with most of the buildings dismantled to build nearby farmhouses in the 1660s, but leaving the solar tower intact. In 1978 the Department for the Environment acquired the site and conducted extensive archaeological excavations, prior to which rubble filled the solar tower to a height of three metres. The site is now in the care of English Heritage and is easily accessible from the nearby church of St John the Baptist, Edlingham.

We were on site for a couple of hours, taking photographs from various angles and at one point we climbed the perimeter fence and headed across a small field towards the stream to get a much wider angle of view. It was from here that the Milky Way was visible and rising directly behind the tower. The Milky Way was nowhere near as prominent as it would have been without the high moon playing a part, but nevertheless is was there and it was ready to be photographed. As you can see in the second photo above, the MW appears faintly behind the ruins. As the moon moved across, from left to right (east to west), even less detail could be picked out. Another night of pitch darkness, with the moon set and a clear sky, would ensure visibility at it's very best. Maybe next time, eh. 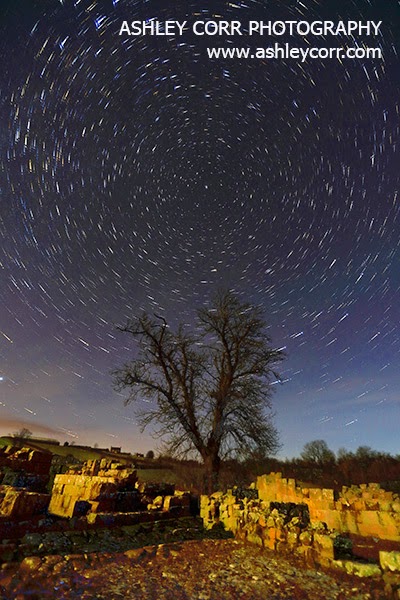 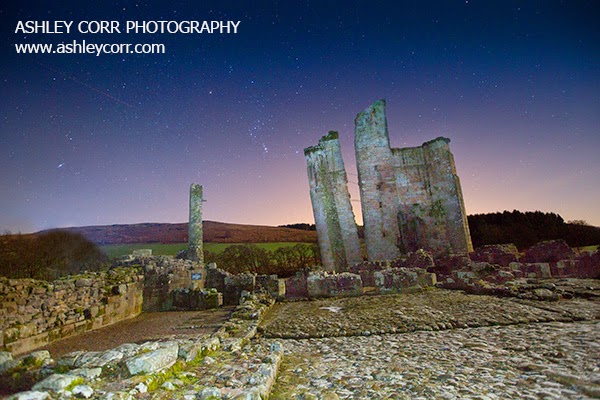 A final flurry of shots came in the shape of a star trail, which you can see here (right). Not the best of examples by any means, but it was nice to finish with a sequence of 25 shots that could be stacked in Photoshop to achieve this effect. Play was stopped prematurely when lens dew appeared. In fact, when wiping the dew with a lens cloth it became apparent that it was actually a very thin layer of ice, which was quite stubborn to remove. Ice, after only twelve minutes in! Ah well, ya can't have it all. It was odd really, because even though it was very cold at the time, I became quite immune to it and could've easily continued for another hour or two. It was only after we'd packed up and headed back to the car that the cold hit me. Walking into it was a wake up call alright. We were soon back into the car and the heaters were on full pelt. It was a good night overall. Great location. Just the background noise of a flowing stream and several Owls calling. Definitely a place to revisit.