A few weeks ago I posted a blog entry here. It was an early morning visit to Littlehaven near South Shields, for some sunrise photography. At the end of this particular blog I said I would be visiting Souter Lightouse the following weekend for more early morning low-light shots. Well, I did make a visit but forgot to write about it so here it is...
It was a very mild Saturday morning in 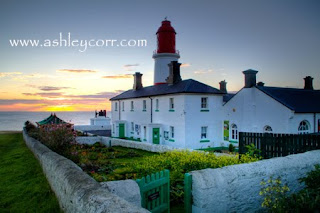 early October and I was in position just outside the grounds of Souter Lighthouse, a National Trust property on the North-East coast of England near the small village of Whitburn. Conditions were ideal so I had my fingers crossed for some decent shots of the lighthouse, hopefully with a nice sun rising on the north sea horizon. The long whitewashed perimeter wall gave a good lead-in line to the shot, with the lighthouse and gardens in centre-shot and the calm north sea finishing off the shot as a backdrop. There was very little cloud cover on the horizon so it was a waiting game as I braced myself for the moment.
I didn't have to wait long. 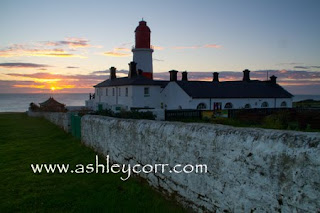 With my kit set up and remote control in hand, it was down to business again and time to bring in more sunrise shots on the coast. Again I was using drop-in Neutral Density grads to balance the exposure and after working out the difference in f-stops,
it was case of selecting the correct filter to achieve an accurate all round exposure throughout.
I managed to get there in the end despite a few mishaps with the lens and the IS (Image Stabilization) setting. After a few minutes I moved inside the perimeter wall and took up position near the vegetable garden, with it's well maintained plot that also offered some valuable colour in the foreground.
OK, time to shoot. It was back into the car, which incidentally, was parked on the main road where it shouldn't have been! Oh well, at 6.00am on a morning you're allowed the odd indescretion. Not many traffic wardens about at that hour is there? While the cat's away!
Until the next time, cheers,
Ash
Posted by ASHLEY CORR at 21:50

Over the past two years I've had a lot of success selling my work to the Tourist Board in Sunderland, the town where I was born and bred. I originally submitted two framed prints back in November 2008 and both sold within their first week of display, so I was promptly invited to replace them with new offerings from my photo collection. I had more good fortune as my second batch sold shortly afterwards and by this time I was now beginning to establish myself within the organisation. A steady supply of new stock, including mounted prints and framed prints also sold quite soon after I submitted them and the trend has continued that way for the last two years. I have sold a variety of frame sizes, all of which carry 'Ashley Corr Photography' images that have been captured in the North-East of England. My finished work is all numbered and are offered as 'Limited Edition' products, and I have recently branched out with the production of 100% cotton canvas prints. This is a new line that I have recently developed and initial sales have started very well.

Because of my involvement with the Tourist Board this has attracted interest from the European Team who are based at Sunderland City Council. The European Team represent Sunderland and act on behalf the City to develop existing partnerships between other countries and to attract foriegn investment to Sunderland. The delegates regularly visit foreign shores and have been buying my work to exchange as gifts during their visits abroad. Consequently my work has very recently been shipped to Russia and China, with more visits to other countries being scheduled for early 2011. Naturally I'm very pleased that my work is now being recognised outside the UK and long may it continue.

I am currently in talks with representatives from other business which may well see an expansion of my work within the local area. Stay tuned for further developments!

You may have read a recent blog entry of mine that was titled 'Autumn Stroll'. It was a blog entry that covered my trip into Durham City, 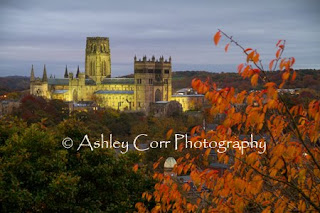 finishing off with a brief visit to Lumley Castle in the neighbouring town of Chester-Le-Street. Well, the second Autumn Stroll of 2010 again found me in Durham City but this time it was around dusk that I was taking my photographs, from a spectacular viewpoint near the railway station. The station itself is perched quite high on a hill near Wharton Park, and as you can imagine, it offers some of the best views you'll come across in Durham City centre.

I planned this one a few days in advance but the weather conditions had me cancelling my visit at least three times before I actually made the trip along the A690 to Durham, Land Of The Prince Bishops. No overcast skies this time, plus there was little or no wind, even up a height. I arrived at my location a couple of minutes after the sun had set over to my right so it was now a simple case of waiting a few minutes until the sky darkened and the illuminated cathedral became more prominent.
It wasn't long before I was taking my first shots. The conditions by this time were as near perfect as I could have hoped for, so I wasn't going to waste my opportunity. Just in front of me stood a tree with it's golden-brown leaves - an ideal subject for some Autumn foreground interest. Even at low-light, the colours on the leaves were clearly visible and I knew a long exposure would capture them quite well so that was my intention as paired the shutter speed with a mid-range aperture. A very mild breeze ensured very little movement in the tree's so I expected very little blur in my finished shot. It was a good one - the leaves weren't pin sharp, but no more than you'd expect from a two-second shutter speed.
The second shot, shown here, saw me pulling in the Cathedral with manual zoom. Different settings, but once again I was running with selective spot focusing, 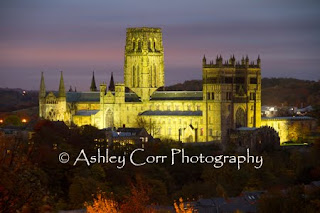 magnified through 'Live View' and set precisely on the furthest point of Durham Cathedral. The Canon 7D has an excellent auto-focus facility and after zooming in the finished shot it was apparent just how pin-sharp the shot was, right across the frame.
Before packing my gear away and heading back to the car I panned the 7D across the rooftops of Durham City Centre, grabbing a series of staggered shots (portrait format) to use later in a panoramic stitch. Retaining identical exposures, I ran off six frames that overlapped approximately 30% which would make stitching a lot easier in post-processing as the details would be identified easier by the software - an important element in photomerge. Stay tuned as I will be uploading the resulting panoramic image in the next week or so.
In the meantime, I hope you like these two efforts, taken during 'Another Autumn Stroll'
Until the next time...see ya.
Ashley Corr
Posted by ASHLEY CORR at 07:26

Presenting another video clip, taken from the local weather bulletin on Tyne-Tees Television, this is Penshaw Monument At Night. My son Christopher (9) accompanied me on this swift sortie up Penshaw Hill and he even found himself on the photo, and the television!

I've taken many low-light photographs at this location but very few with people in the frame. I think it worked quite well to be honest as it gives a sense of scale to the viewer who may not know how big the monument actually is. When Pip chose this photo it came as a big surprise to us when we were sitting watching the weather bulletin and there it suddenly was. It was a case of little fella - big smile. He cant wait to tell his mates at school.

Til the next time, cheers.
Ash

Hello again to you blog readers - all 3 of you, he he! 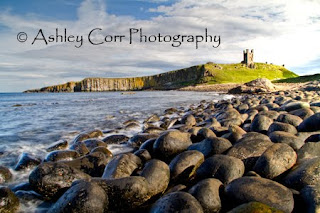 to brush off those cobwebs eh - a trek through the dunes on the Northumberland Coast near Dunstanburgh Castle. A favourite spot of mine for seascapes, the weather at Dunstanburgh Heugh's was quite mild today and the sea was very calm. You'll find a lovely sandy beach up here - a long stretch of it infact, before you hit the bolder field on your approach to the castle which is perched high on a crag behind Lilburn Tower.
This is one photogenic coastal spot! 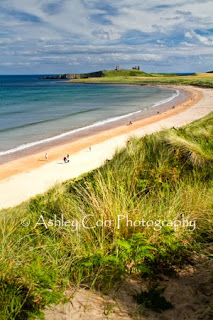 Negotiating the bolders is a tricky one mind, so tread carefully if you're thinking of retracing my footsteps. Taking a few risks may well bring in those hot shots though, so it's a case of 'Who dares wins' I suppose. Waterproof footwear is the way to go, especially with the incoming tide crashing against the rocks. No problem in that department today though, I'm glad to report, so it was back to the car and a trip back down the A1 to Amble Marina. A nice chippy awaits and a big box of haggis 'n chips, weshed doon wirra bottle of ice-cold coca-cola. LET'S GO !!!
Ash
Posted by ASHLEY CORR at 15:04