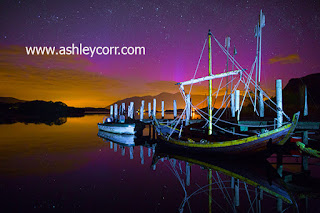 As you can see, I'm still alive and kicking, despite my 4 month absence from my blog page. Lots to catch up on, with new images and stories to accompany them, as well as an insight to what lays ahead with all things photography.

Todays blog entry takes me back to Saturday April 22nd, going into the 23rd, 2017. An all-nighter on the shores of Derwentwater and after midnight it would be my birthday, so I was hoping for a productive night with the camera. My brother Chris made the journey with me, across the A66, arriving at approximately 9pm. Earlier in the day I received an aurora alert on my mobile phone, but the north-east was clouded out, so we made the journey west, where clear skies were predicted. I remembered previous Aurora shows, notably on St. Patrick's Day and Mother's Day, so the omen's were looking good for tonight - St. George's Day! We decided that Lodore Jetty, on the edge of Derwentwater, was where we would set up for the night, looking north across the water towards the Skiddaw range. We had the place to ourselves, which was ideal - no-one else shining torches or getting in the way. That'll do nicely. 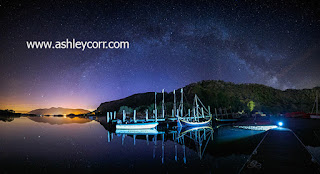 It was still quite cloudy when I set camera one up, although what was left of the clouds appeared to be moving east, leaving clear skies ahead. Within minutes a purple haze could be seen in the distance, towards Skiddaw and Lake Bassenthwaite. Then purple spikes appeared. Some nice structure, albeit very brief. They moved from left to right, disappearing behind Skiddaw. I was running a time lapse sequence, so I was rather chuffed to have caught the movement on camera. It was a great start to the night. As camera one pulled in the shots I set camera two away, pulling in continuous shots, which I would use for a star trail. Derwentwater was so still and there was no breeze at all. This was an idyllic spot, even at night, with only owls for company. 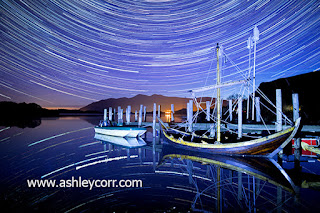 I was shortly after midnight by this time and we were both getting hungry. I left Chris at Lodore and headed into Keswick in search of takeaway food. I parked up and headed across the road to a pizza shop, but the guy inside said he was closing for the night, which was great. Starving and craving a kebab when the bloke waves his hand and shakes his head. Cheers mate, I get the message. I had a quick drive around but nowhere else was open, so I headed back to Lodore empty handed. I'm driving along the lakeside, it's obviously pitch black at half past midnight. I've seen it all now - a young girl, probably late teens, walking along the road with headphones in and a small torch in her hand. I was amazed. I mean WTF. She was nowhere near houses or any real safe haven. Instinct told me to check that she was ok, so I slowed down and her if everything was ok. She looked across, said 'Yeah' in a very confident tone, then looked away and continued walking in pitch dark. I said 'Ok then' and drove on. Very odd!

Got back to Lodore Jetty and grabbed what was left of my goody bag - two bags of crisps and a few biscuits. Hardly a kebab, but what can ya do, eh. We spent three more hours waiting for another glimpse of the aurora, but we'd seen the best of it by this point. Before heading home I ran off a quick panoramic sequence of shots, 5 in total, panning from left to right above Lodore Jetty, where the milky way was ideally placed and arching across the night sky. It looked amazing. A fox screeched on the fells, echoing across the lake. This night photography is so addictive, with nature adding those final little touching, as well as Mother Nature chipping in with some aurora too. It certainly was a birthday to remember and a very productive one at that.