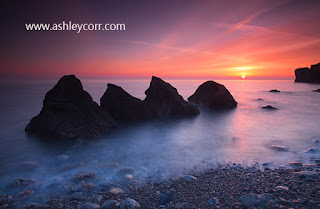 A rare sunrise outing for me in 2016. The location - Trow Rocks, a small cove near Graham Sands, South Shields. Another first, despite a previous visit to this location during an afternoon last Spring, this was to be my first attempt at capturing the sun rising to the west. It was a very mild morning and as soon as I walked out of my front door at 5.10am, I knew it wasn't gonna be one of those biting cold mornings that I usually associate with sunrise outings. Almost half an hour later I was on location at Trow Rocks and ready to capture another sunrise. The sky looked promising and as time slowly ebbed away I could sense this was going to be a productive morning. Not a great deal of cloud to the west, but just enough to breath some colour into a partially clear sky. The waiting game was on! 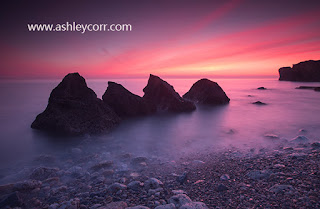 An elderly couple joined me as sunrise approached. I was more than happy to have what appeared to be prime spot in front of the jagged rock formation, so I quickly got to work and ran off a few test shots. The tide was high and it coincided with sunrise - a single factor that brought me to this spot today. Standing with my back up against the rock face, I was shooting as wide as possible without vignetting, due to the stack of filters I was using to balance exposure and capture the tide with a slow shutter speed. It worked well and it was another sunrise location ticked off. Here is two shots - one before, and one after sunrise. Only one task was left to complete - a visit to McDonald's for a breakfast wrap and a nice caramel latte. Needless to say, this was another box ticked and I then it was a simple case of driving home. Short, but very sweet.