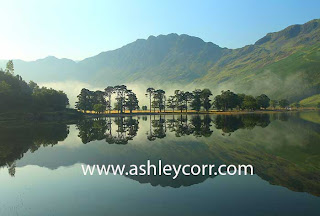 Last weekend, Bank Holiday, was spent in the Lake District as part of a two night camping trip. The weather was brilliant throughout, with not a single drop of rainfall, which is quite a rarity in Cumbria, even in Summer. We pitched our tent at Castlerigg Farm, Keswick, which was our fourth visit to the site over the last two years and certainly one site we'll be revisiting in 2014. On Monday morning I was up early and heading out in pitch darkness for a sunrise at Buttermere. A 5am alarm call started the show, before the 40 minute car journey through Seatoller, then the climb onto Honister Pass, before descending through the valley and into Buttermere. Upon arrival visibility was very poor. I stuck around though, being a patient and persevering type of photographer (he he), and was duly rewarded with one of the best scenes I've ever witnessed - it really was something else. The Buttermere pines, reputed to be the most photographed set of trees in the UK, along with a still lake, giving a glass like reflection that was screaming out to be photographed. The mountainous backdrop added to the picture, so there was no time to stand on ceremony as the scene in front of me only lasted a short while before the water began to ripple and the reflection disappeared. By the time that eventually happened the shots were in the bag. I'm looking forward to opening the folder with the other shots in, to see if there are more gems to work with. Here is one that I sent in to regional TV, as a weather shot. My photograph, which is titled 'First Light, Buttermere', was shown on ITV Border at 6.30pm on Wednesday 28th August, then again on BBC Look North 30 minutes later! 48 hours later it resurfaced on BBC once again during another weather forecast. Here are the screenshots, along with the original, converted from RAW to JPEG and downsized for the web use. 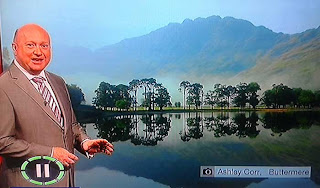 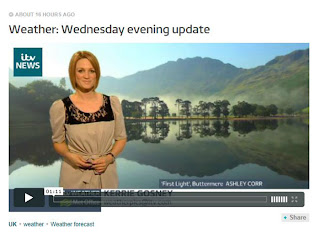 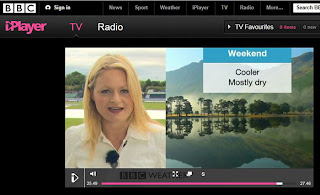 I have a rather nice set of framed prints on offer at £45 each. One or two examples can be found on display at Clay's Garden Centre, Washington and also Penshaw Tea Rooms. Mounted in white and framed in black, each measures 20x16 inches and is part of an ever increasing set of 'North East Icons'. There are four available at present, with more additions planned for the very near future. I recently sold two to a customer in Lechlade, Gloucester, so it's nice to know my work is continues to be scattered around the UK and further afield. Here are the icons that are currently available. I will post photo's of the actual framed images during the next few days. Cheers! 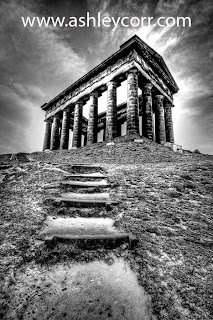 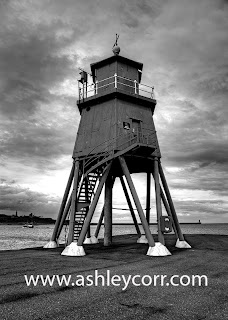 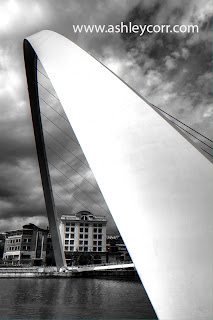 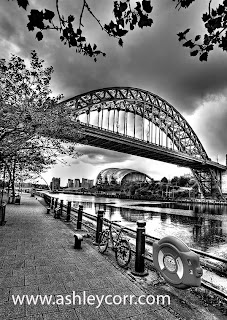 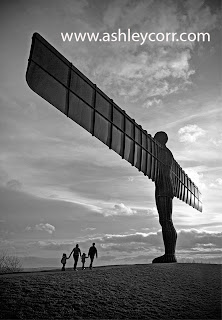 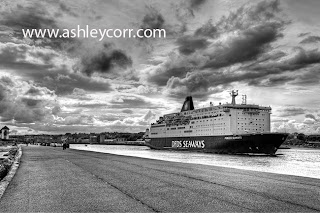 Wot, two blog updates in as many days! I guess it must be pissing down outside!!! 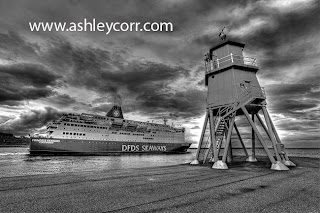 Oh dear, the colourful language raises its naughty head again, tut tut. Of course, pun intentional, as this latest blog entry has nothing to do with colour, unless of course I refer to grey scale, also known as Mono, but more commonly referred to as Black & White. I've never been a big fan of this type of photography to be honest, but lately I've been dabbling more and more with B/W conversions, and quite liking the end result. A big part of a good conversion is picking a suitable image to begin with. Many images simply won't work, so get your selection right and you're half way there. I cherry picked a few recent shots of mine before giving them the B/W treatment, and I'm well satisfied with their 'New look'. The majority of these shots were captured on dull, cloudy days, which is a good start as a lack of available colour generally has me pointing in the direction of B/W anyway, coupled with the fact that these moody skies often add a sense of drama to the shot, lending themself to B/W more than colour. Another slice of criteria is contrast - I tend to favour strong contrast in B/W conversions and always look at the depth of shadow and highlight before making a decision whether to 'Convert' or 'Back heel' the image I am considering for use. Thinking rationally, if it doesn't work in colour then there's only one path to go down. I choose to do my B/W photography in post processing, rather than capture it at source with the aid of Yellow, Orange and Red filters. Traditional methods, such as the Y/O/R filter route, were the only way to achieve true B/W shots before the introduction of digital camera's, but now it's a whole new ball game when you can easily lay your hands on a decent editing suite such as Photoshop. The end result, with the help of Photoshop is just as pleasing on the eye and it's a lot cheaper than shelling out on expensive B/W filters (that is, providing you have a copy of Photoshop that you managed to download for free!). Did I really say that? (wink).

And now to the business end of this blog entry - the photo's. Here is a small selection of B/W images by yours truly. Don't forget to click them for enlargements. The list is as follows...

1. Tynemouth (above)
Standing on the pier next to the Groyne Lighthouse, Littlehaven, I waited a few minutes for the arrival of the Amsterdam-bound ferry, which eventually arrived on schedule.  Plenty of great detail in the sky!

2. Tynemouth 2 (above)
As the ferry approached the Groyne Lighthouse at South Shields, I waited til it sailed alongside, then I tripped the shutter. 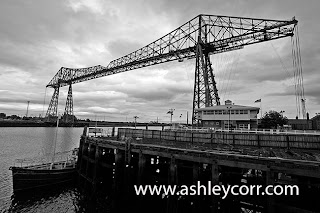 4. Temenos, Middlesborough
A dramatic artwork on the banks of the Tees, with the Transporter Bridge in the background. 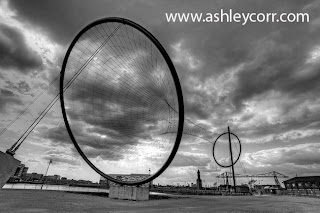 5. River Tyne, Gateshead Quays
I shot through a glass partition to get this one. A storm was brewing, as you can see in the distant black clouds. The rain was well and truly on its way... 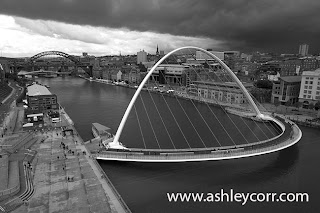 6. Baltic Arts Centre, Gateshead Quays
And the rain soon fell! I took the lift from the viewing terrace back to ground level, which took no more than half a minute. Within this short space of time the heavens had well and truly opened. Seeking shelter in the Baltic doorway, I grabbed this shot, with like-minded folk opting to stay dry. 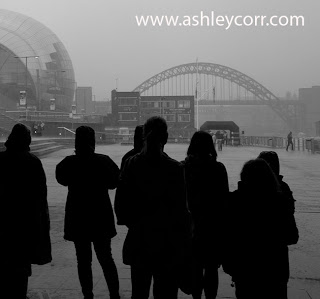 7. Roseberry Topping, Near Great Ayton, North Yorkshire
(as featured in my last blog entry). Works well in B/W. I quite like the added effect of the overhanging tree, which almost 'Frames' the iconic hill in the background. 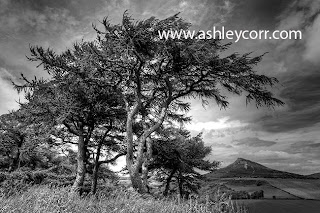 8. St.Mary's Island, Whitley Bay
And finally, an experimental shot. Taken in broad daylight with a shutter speed of 45 seconds!!!!
An ND filter was applied to achieve an extra long exposure time, thus smoothing out the water in the process. A very dull and overcast day, with very little detail in the sky, Poor conditions for my type of photography, but you have to make the most of what you've got to play with, and on this occasion I landed a decent shot...

And that's all for now. I'll be back soon...in colour!
Ash

Welcome back to my blog page! 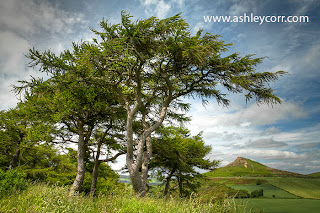 I have many new photo's to share, but finding the time to upload them is another matter, which is the main reason ashleycorr.com hasn't had the update treatment lately. But that is about to change. A busy July scuppered my chances of getting out with the camera, which obviously had a knock on effect with site updates. However, I got my arse into gear this week and ventured outdoors once again to catch some more of the local landscape, including sets from Offerton, Cox Green and Wearmouth. They'll be here soon enough, but first up is a selection of images I captured in North Yorkshire, at Roseberry Topping near Great Ayton, a fifty minute drive from my home. I'd visited this location as a kid, as part of a school trip to Captain Cook Country, and distinctly remember being shepherded up the hill by our teacher, who clearly wasn't enjoying the task due to a complete lack of fitness on his part. Roseberry Topping is a mere 320m in height, so hardly Mount Everest in comparison, yet our shepherd struggled big style, and was ready to collapse at any given moment, much to the amusement of me and my classmates, he he. Since then, I've had no connection with Roseberry Topping, other than marvelling at it in photograph form, taken by Joe Cornish (probably Britain's most famous Landscape photographer). Joe lived locally for many years, so the Topping was on his doorstep - easily accessible throughout the changing seasons, and ready to be captured in all its glory. I made three visits to this site between May and June. My first jaunt was for one purpose only - to photograph the bluebells, with Roseberry Topping as a backdrop. The result is shown below. The bluebells were on show for quite some time, but getting 'The shot' wasn't as easy as first anticipated, due to the fact that a fair few had been trampled on by idiots. Aye well, you get them everywhere, unfortunately. 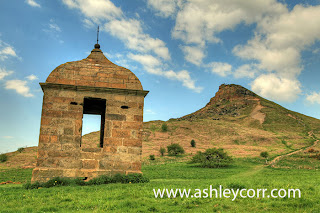 From the car, parked in the visitor car park at the foot of the hill, it was a very mild accent through the bluebell woods and up towards the summit, taking around 40 minutes in total. There were families up there, dogs, pensioners et al. Great views from the top, panoramic style. Another visit saw me heading through the woods once again, but instead of climbing to the summit, I headed through more wooded areas and out towards the fields. I wanted to retrace the steps of Joe Cornish and to locate one or two of his vantage points that he photographed from. After studying one of his shots in particular I headed up a footpath towards where I thought the shot was taken. I found it in no time. The foreground trees were ideal for a landscape shot that I was about to land, so I got to work quickly before the clouds drifted over and killed what was left of the blue sky in my viewfinder. Click. My first shot (top) is without doubt my favourite one from the three visits I made. I converted it to Black & White, and it too made a great shot! Another visit followed soon after, as I was in the nearby town of Guisborough, so paid a visit while the oilseed rape was on show, also shown here. And no doubt I'll be back again, sooner rather than later. I reckon Autumn might throw up one or two surprises down there.

Finally, click this link to view the Joe Cornish shot, which I replicated above. A nice comparison - which one do you prefer? 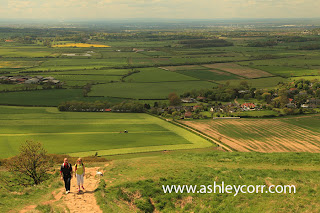 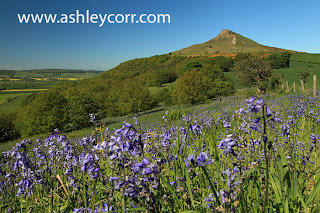 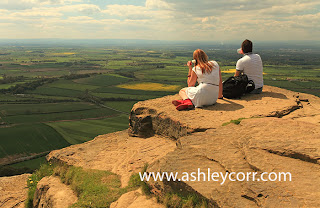 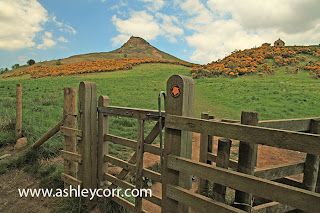 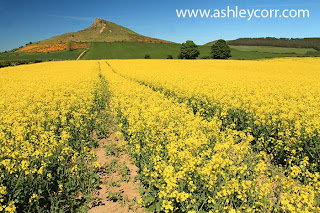