I'm back with another video clip!
Just getting up to speed with my latest Weather photographs that I recently submitted to Tyne-Tees Television. Two more shots, one of which was shown late November and the other on December 22nd. The first was taken along the banks of the River Wear in Durham City Centre. A low-light shot of Durham Cathedral, using a long shutter speed of 50 seconds on the Bulb setting, fired remotely with the aid of Mirror Lock. A nice shot, especially with the nice reflection of Durham Cathedral in the almost still waters. It was pitch black at the time of capture, which is hard to believe when you study the detail in the composition, but those long shutter speeds put paid to any under-exposure, so if you fancy giving it a try, dive in! Lack of light doesn't always scupper the chance of a decent shot, just let your creative juices do the rest and you'll be surprised at what you can achieve. To read more of this outing, click here.

My second Weather shot was captured on Seaham Pier. You may recall a recent blog entry that was dedicated to this particular outing, if not...click here to read about it. I like this shot a lot. A lovely sunrise, around 8.30am, a couple of weeks ago. Well worth getting out of bed for. The details, well, another long exposure of 4 seconds, perched on the tripod, aperture priority at f22, 100 ISO, fired remotely (as per), and shot in RAW format at 18 Mega pixels. The shot is tack sharp from back to front and may well get the print treatment at A2. We'll see...

And that's about it, for now. I'll be back soon with the final book cover of 'High Moon 2' which features one of my Finchale Abbey shots. The book is about to go to print, so more on that, as and when it happens. Again, for anyone who may have missed the finer details of this - click here. 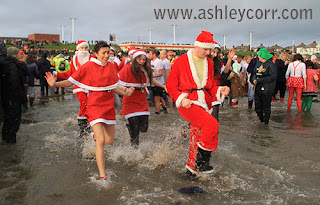 As mentioned at the end of my last Blog entry, here are some more Seaside shots. Not my usual Seascape offerings, these are 'People shots' taken on the beach at Seaburn, Sunderland, during the annual Boxing Day Dip. I already have a slide show at ashleycorr.com featuring more of the same from last years event, so feel free to check that one out. I had no plans to attend this years madness, until I received an email from the people at the BBC Tyne and Wear website, who dropped a hint for photo's of the event to add to a regional Boxing Day Dip gallery they were about to create. I charged the battery pack up on Christmas day and made the usual preps, before throwing the Wellies into the car for the task ahead. The Boxing Day weather was very mild, which was a definite plus point, as this was the only thing that would have put me off. I mean, who wants to brave the wind, rain and freezing cold North Sea, when they could easily be sat on their arse eating more turkey leftovers! If I see another piece of that stuff I'll most probably throw up - so off I went, bound for the coast at Sunderland. The event kicked off at 11am, so I made sure I arrived with at least 30 minutes to spare, parked up and ready to go. The crowds were out in force to witness this increasingly popular show of mad Mackem folk, running into the sea with barely a stitch on, all in fancy dress, all shapes and sizes. There were some big 'un's on show alright. I'm sure Greenpeace were in attendance, ready to push one or two of them back into the water! Yeah, some big ones - hairy, covered in tattoo's and looking mean as owt - and they were just the women! 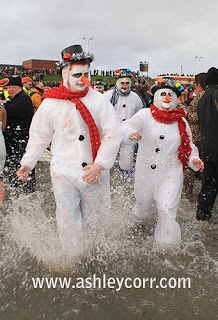 Well done once again to the attendees of this years dip. Thousands of pounds raised for good causes through sponsorship and collections on the day. There are several such dips held around Europe, but the largest is organised by the Lions Club of Sunderland and it attracts one thousand dippers every year. Up to five thousand spectators turn out to witness the dip, including the City’s Mayor and Mayoress. Originating in 1974 the dip is one of the oldest events in the country. The dip of 2011 raised nearly £90,000 for charity, with several teams taking part. Some of the major donators are Ashbourn Guest House, Alexandra Plumbing and Heating, the New Clipper, CR Builders, TWR Window Frames, Ttonic, MTL Scaffolders, Print Centre, Jolly Potters, Jacksons.

11am came around quickly enough - I almost got flattened in the stampede. The lens cloth I brought was a godsend. I grabbed what photo's I could before everyone had their few minutes of fun before retuning to dry land. By this time I was soaked. Wellies were half full of salt water, freezing cold salt water. I did, on more than one occasion, ask myself why I bothered in the first place, but casting aside the obvious disadvantages, our Boxing Day Dip has its merits. Firstly, I was lucky to photograph the event instead of actually taking part, then there was the fun side of it, seeing all the madness unfold right in front of me, and there were some brilliant costumes on display. Finally, the short walk back onto the promenade was a good one, as usual, as the sight and smell of the fish shop was one to behold and I certainly wasn't gonna walk past it. Greedy bastards never do, he he. Sorry for the lingo, folks. Just getting the last few swear words in before yet another failed New Year's Resolution. Oh well. And on that note I shall bid thee farewell, with the promise of one or two more Blog entries before the end of 2011. Make sure you overdo it (wink).

Oh, before I go, here is a link to the BBC Tyne and Wear web page,  featuring a couple of my shots. I sent a few in, but they decided to show two of my 'Weaker' efforts, for some odd reason. Click here (Image numbers 4&5). Also, a short video clip from 'Look North', our regional BBC news bulletin, featuring this event. Plus, a few of my photo's. . . 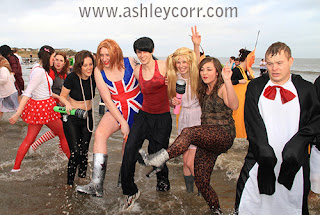 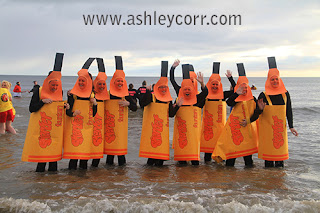 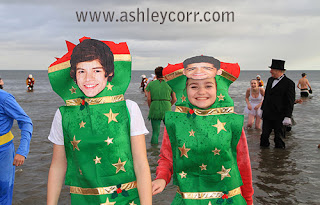 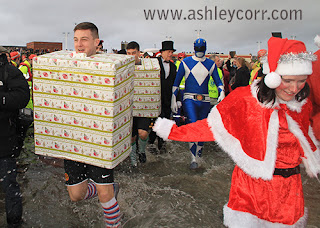 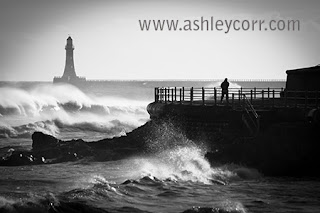 With Christmas almost upon us I took the opportunity of using a spare hour or so to fit in some photography. December has been a quiet month with the camera, as you may have noticed by the acute lack of updates at www.ashleycorr.com. This has been due to the usual hectic programme that often accompanies December, but I intend to make amends before the month is over, with a few updates being planned for the final few days of 2012. My last Blog entry brought you a batch of Seascape images, taken at Seaham Harbour last Sunday morning, and I was by the sea again this morning for more of the same. This time I was shooting big waves from the promenade at Seaburn, Sunderland. Although there was bright sunshine this morning, it was typically cold and the strong winds almost had me on my arse on more than one occasion, but I managed to keep my balance against all the odds. My Sigma 70-300mm lens got a rare run out today. It was just what was needed to pull in those telephoto shots - range is everything when shooting from afar, so the long lens was called upon once again, and it never fails to deliver. There was very little colour to play with this morning, so I converted my shots to Mono (Black & White), which is always a good idea with this type of photography. I think it worked quite well, apart from the lack of detail in the sky, but you can only pee with the tail you've got! Some folk add new sky to get round this problem, but we don't want to do that do we - no cheating allowed!

And here they are, three shots, cherry-picked from a batch of ten and shot in RAW format. I was done and dusted, then out of there after a few short minutes. Back into the car and off home to sit down to a nice roast lunch. I'll be back soon with more Seaside shots, so get yer'sel back here in a few days time. Until then, have a nice Christmas and don't overdo the calorie count, eh. You know it makes sense! 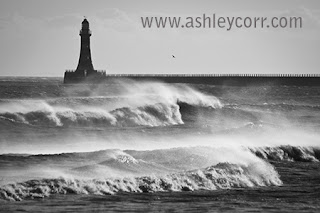 In From The Cold

It's been a while! 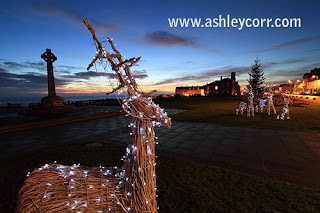 Hello again, and an apology to my blog readers for an acute lack of activity on my page. Historically, December is always a busy month for me as I fulfil orders and other commitments during this hectic time of year. Naturally, I have less time to get out and about with my camera until the Christmas holidays, but I managed to change that this morning by getting my arse out of bed to photograph another sunrise. This time I travelled South, which is a rarity, as all of my previous coastal visits have been to the North of Sunderland. Today the destination was Seaham Harbour, a small town in County Durham, situated 6 miles (9.7 km) south of Sunderland and 13 miles (21 km) east of Durham. I made a quick stop to photograph the Christmas display on the promenade before driving the short distance down the gill towards the harbour. This was my first visit to the pier at Seaham. Upon arrival I got chatting to a fisherman who had travelled from Consett. He told me the sea was very rough the previous day and huge waves had battered the pier walls, which was evident 24 hours later by the many pools of sea water that sat along the whole length of the pier. He set up to fish the sea as I went on my way, passing through the pier gates to look for an ideal spot to photograph from. Unlike most piers, this one had no perimeter fence, so I made sure not to go too close to the edge, or that would have been it!

Here are some of the photographs I captured. Plenty of colour, the sun on show, nice compositions. It was nice to get back into the car and open a flask of hot coffee, whilst warming my backside on heated seat. Overall, it was well the effort this morning - I 'll be back with more before the Christmas holidays. Stay tuned.
Ash 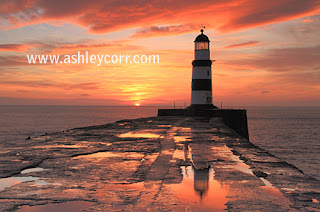 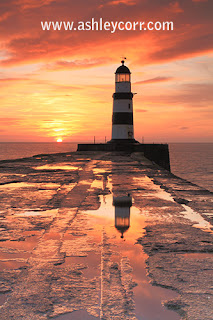