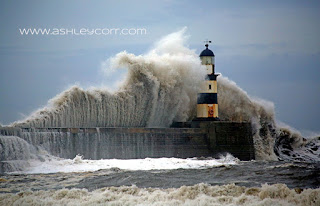 Welcome back to the blog page of the wandering Mackem photographer. So far 2016 has been a complete washout as far as the weather has been concerned, with overcast skies and rain in abundance, so I'm far from surprised at the typical English weather January has delivered up to now. Photography isn't all about blue skies and a red hot sun, as any decent tog will tell you, it's all about capturing the moment in all weather, which is the beauty of my hobby - every season has something new to offer. Sunday January 3rd typified a miserable cold and windy day in the North-East of England. Looking out the window at home I saw nothing to get excited about, so after sitting down to a lovely Sunday roast I decided to park my backside once again and out came the ipad. I had a quick browse through Facebook and noticed a set of photographs by a local press photographer, Owen Humphrey's, who'd captured some big wave action at Seaham Harbour, a 15 minute drive from my home. At that point I thought about taking myself across there to see if the surf was still kicking hell out of the North Pier wall. Although I'd missed high tide by a couple of hours I still expected the show to be gathering momentum, so off I went with my Canon and telephoto lens. 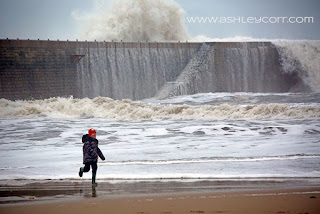 It wasn't long before I arrived at the coast, swinging right after the Seaham Hall turn off and seeing how rough the sea was at Vane Tempest. I was most definitely in luck. I headed straight down to the harbour and parked near the end of the North Pier - a front row seat as far as entertainment goes. Well I wasn't gonna bag the shots I wanted from the car window and I had no intention of staying off the sand, so off I went, with tool bag and tripod for company. There was a few people dotted about on the small section of sand in the Harbour. At first I set my camera up on the tripod and aimed in straight at the lighthouse, which was clearly the focal point of the composition and a subject that was clearly receiving major abuse from the cruel North Sea. This was Mother Nature at her best, or worst, whichever side of the fence you prefer. Kids ran around on the sand in front of me, adding some much needed foreground interest. Weather photographs, especially in adverse conditions, are most eye-catching with an added human element, so it was my task to pull in a few action shots to depict an aspect of fearless photography. More on that later. 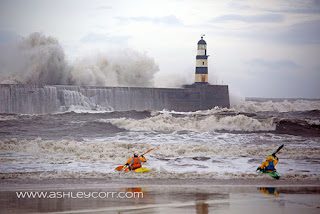 I ran off a few shots remotely, observing the waves and pressing the button when the big boys gave the pier a back-hander. What a sight! Only two days previously I witnessed a fine Aurora display by Mother Nature and here I was, literally a few hours later, watching her carve out some magic once again. A Canon 5D3 was used to pull in the shots, combined with a 75-300mm lens, which was ideal and up to the task in front of me. Focus lock on was instant, as it should be, and when more people showed up on the beach I took the camera off the legs and shot handheld for the remainder of the hour or so I was on location. I got chatting to a fellow photographer, Alan Cook, who I 'd met previously at Penshaw Hill, Sunderland. Great bloke and we had a laugh in between shots. Still running handheld, it was ideal, swinging the camera here, then there, not wanting to miss a slice of the action. The gloves were still at home though - not sure what I was thinking about there, but I do know my hands were heading towards Numb Street, a very long street at that. I was friggin' freezing!!!! What to do eh, other than grit ones teeth and suck a lemon. 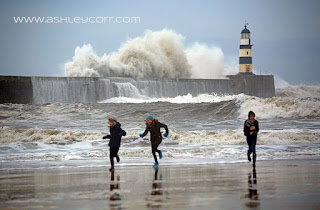 Then the star turn arrived. Now, this had to be seen to be believed. A pair of adrenaline junkies from a local kayak club decided to wade in and compete with the surf. Oh dear, surely this was a David and Goliath scenario, with only one outcome. Me and Alan gave each other an odd look when the pair headed into the water, albeit for a very short time before being tipped out and onto their arses. Surely they were risking their lives! And this is where the fearless photography comes in. Their determination was to be admired, but that was easily overshadowed by the thought in my head that these two blokes had mentally lost the plot. I wondered whether it really was two blokes out there, or John & Ann Darwin, in disguise - click here for the connection.  It wasn't long before they attempted another entry, only to be thrown over once again, resulting in the pair giving up the ghost completely. A blessing in disguise, if ya ask me. How on earth they thought they'd beat the adverse weather conditions is beyond me. God loves a trier, but this was just plain idiotic! 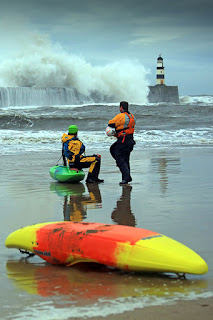 After an hour of photography I called it a day and headed back to the car, where a nice cup of coffee was waiting. Very much needed. I sat in the car as I downed it and watched the last of the surf before heading back home. Later that evening I had a look through the shots on the back of my camera - they looked quite good, so it was mission accomplished. It wasn't until I viewed them on the laptop that I decided to post one or two on Facebook. I was a bit unsure at first, but decided to upload them as my first post of the new year. The response I received was very flattering and I was quite surprised, to be honest. I added a set of 5 shots to three different pages, which raked in over 1,000 likes, as well as many positive comments, which was very nice. The best thing though was witnessing such a spectacular show at Seaham Harbour. Mother Nature throws up some interesting events, with this being up there with the best of them. 2016 kicked off in fine style. Part 2 of this episode is coming soon. Stay tuned!
Thanks again for visiting my blog.