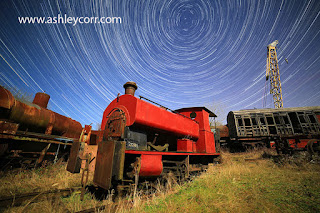 Hello again and welcome to another rare blog entry - my first of 2018. I've had some recent issues regarding signing in to my Blogger account, but hopefully they are now a thing of the past and I can reignite this page once and for all. This is easier said than done, however, but I'll get my act together one of these days, trust me.

And so it continues with more writings. Planes, trains & Automobiles - an account of a recent visit to a train graveyard in the North-East of England. An ideal place to practise some more night time photography under a sky full of stars. Make no mistake - this graveyard is one hell of a place to visit with the camera. Without doubt a place of unending interest - a place where your thoughts can very easily be transported back in time to an era that you never actually experienced. I stood there, surrounded by trains, carriages and trucks from a bygone age, all ancient and disused. This was a museum of relics, most of which were standing idle on short sections railway lines, accompanied by a platform, a station, a turntable, amongst others. As a photographer of the night sky, this place was a gold mine of foreground interest - an absolute gem of a place that I was wanting to bring into my photography. The scene was set. All that was now required came in the shape of two camera's on tripods and a boat load of patience from myself. Put the two together and the results are shown here. 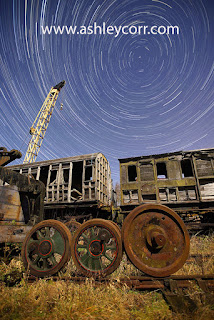 Me and our Chris had visited this place three months ago to attempt a star trail. 40 minutes in and some unexpected clouds drifted across and closed things down. It was a disappointment, but not to be derailed, it was a case of waiting for another opportunity to eventually tick this one off. Three months had passed before the opportunity presented itself. This was New Years Day, 2018. Clear skies were here once again. Factor in a 20 minute drive to this location and it was game on once again. Let's get this party started. Upon arrival it was quite chilly, with a slight wind thrown into the mix. Once parked up we went through the gate and headed down the ramp towards the graveyard. Once down in the dip there was a very noticeable temperature drop and the wind that was is suddenly no longer. Looking above it was a sorry sight. Cloud cover was claiming at least 70% of the sky and certainly not what the weather watchers had forecasted earlier in the day. Hmm, looks like we'll have to wait it out. Have faith in the weather watchers and thou shall be rewarded. 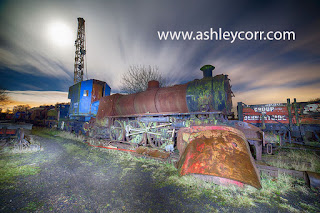 For almost an hour, we scouted out the best spots for our imminent star trail. Once decided, we killed time by photographing some of most eye-catching trains and trucks until the sky had cleared. In fact, some of this unwanted cloud was beginning to play a part in my first shots of the night. It was fast moving and a couple of five second exposures pulled in some great results. There was a full moon tonight, which was to play a big part in our star trails, as it sat in an ideal position behind us, lighting the scene perfectly. Don't you just love it when a plan comes together? Not a bad way to start a new year, with the pieces of the puzzle falling nicely into place. Neat.

PLANES -
Oh there was more than a few. Yeah, we were close to a flight path and the new year traffic was
in abundance. Nothing new there then. There would be some canny Photoshop wizardry going on tomorrow remove those plane trails.

TRAINS -
Awesome foreground. Relics of interest. Dozens of them, adding to a scene that an astro photographer would lap up in no time. I've picked out some interesting foreground in the past, but photographing this stuff beats the lot. Even the abandoned aeroplane in Cumbria. Oh yes, it doesn't get better than this. 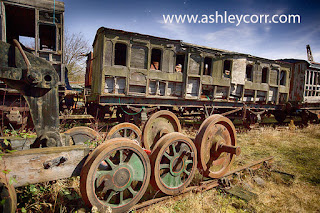 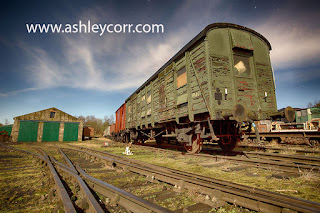 With heated seats! With the shots in the bag it was time to get out of this place. Heaters on, radio on and yes ... those heated seats, too. A quick stop off at our local kebab shop rounded off a great night.

And those star trail shots. Yeah, one lasted 100 minutes in total. After setting the Canon away I moved a few metres down the track to set up my Sony a7s. Ten minutes of preps and the camera was now set up and firing. This one would run continuously for around 90 minutes, after which time we stopped our camera's and packed up, before heading off site and into the warmth and comfort of the 'Automobile'. Another job done. I love nights like this. The images were collected and in the bag.


Until the next time, cheers