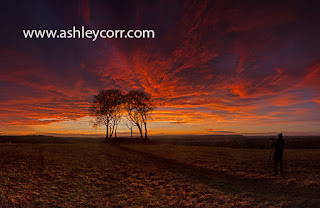 Back for a brief update here on Blogger. With a folder full of backdated images to get through, I tick another batch off as I bring you my latest writings on all things photography. December 2108 and one of those 'Shall I' or 'Shall I not' pop out for an hour with the camera. It was a Saturday afternoon and the sky was brewing up quite nicely as sunset approached. I lost count of how many times I looked out my back window to check the sky. Each time I saw it I was nudging ever closer to grabbing my camera and heading out. With sunset looming I knew I wouldn't have time to go too far, so it would be another one of those very local trips like ... yeah, that ... the Copt Hill Barrow. Why not, it's in my own back yard and it's always a nice thing to pull in great shots from this location. I've lost count on the number of visits I've made, but hey ... two visits are never the same, let alone fifty! 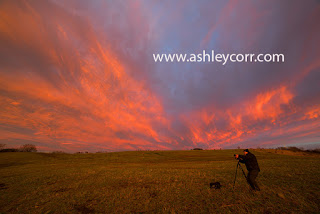 And so it was to be ... the five minute car ride up the hill and across the field to those Seven Sisters. I got there around 30 minutes before sunset and the early indication was that this was gonna be a good one. Already the sky was taking on a colourful canopy - a one that would play an ideal role as backdrop for the Seven Sisters. Another photographer turned up, setting his gear close by. We'd met before. It was Ken Foulds, who lives across the way in Belmont, on the outskirts of Durham. Strangely enough, our first meeting was at this very same spot. Great minds think alike. I grabbed a couple of shots of Ken as I photographed his own scene, both of which are shown here. As the sky started to kick off I dotted around the Copt Hill, capturing the scene from various angles. The sky was definitely living up to its earlier billing, as the colour presented itself and seemed to linger for an age. This wasn't going to be a brief affair. 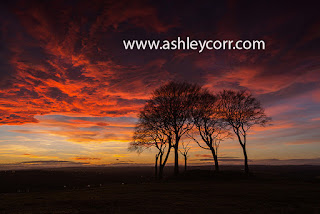 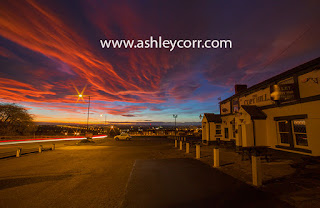 I was running with the Canon 5D3 for this outing, couple with a 16-35L lens and nothing else. No filters or remote, just the basics. I even   left my mitts in the car, which wasn't exactly the smartest move I made, as it was bloody freezing. Then again, we were into late December, so not to complain eh. I fired off around twenty frames in total, which definitely had a keeper or two amongst them, so I was looking forward to getting them onto my laptop to have a better look. So without further ado I said goodbye to Mr Foulds and headed off back to the car. By this time it would have been around 4.30pm. I had parked up in the Copt Hill Inn car park, which is a short walk from the burial ground that is Seven Sisters. I noticed there was still some lovely colour in the sky, which was odd, as the sun had actually set an hour ago. By this time there's usually no trace of red in the sky, but on this occasion there was still plenty to see. It was almost apocalyptic. Amazing to watch as it took on an almost surreal sight for sore eyes. Looking back now, I can safely say that the last photo I took (shown here, of the Copt Hill Inn) was by far my favourite one of the lot. Now, that was not part of the plan when I arrived, but sometimes those little surprises make the experience a whole lot sweeter. And so it was ...

Until the next time, be good