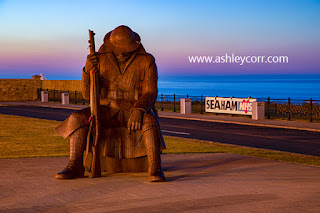 As we came out of national Lockdown in June 2020, it was a relief to think that life was beginning to return to normality once again. Since March of this year, the world as we know it had been struck down by Coronavirus, with over 50,000 casualties. The NHS faced unprecedented times, as they were stretched to the limit and beyond. For weeks on end, lockdown affected everyone and life was very different, with an ever increasing threat that we all faced, as Coronavirus ripped through the world.

As we came out of lockdown a semblance of normality began to surface.We were no longer tied to the confines of our homes. It was an uplifting feeling to be able to do the normal things in life once again - things that we had maybe taken for granted, at times. I headed out one night to the Tommy statue (Mission 11.01) at Seaham Harbour, County Durham. Their was no plan, other than to get some fresh air and hopefully pull in a couple of decent shots. The backdrop that was an NHS sign seemed to be the perfect exceuse to get out of the car and record a snapshot of these very strange times. After all, if it wasn't for our NHS, god only knows how worse the death toll would have been! 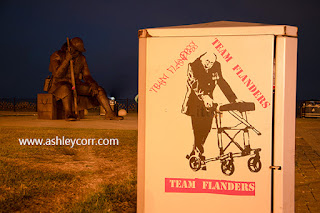 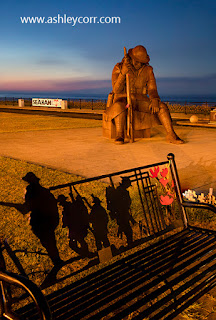 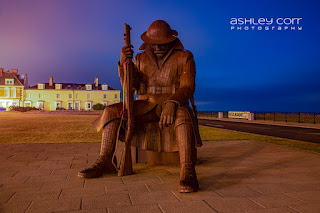 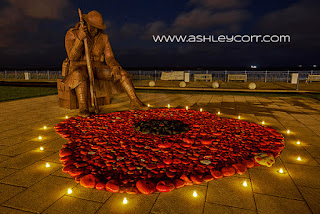 Visitors to my Facebook page will be well aware that one of my favourite subjects to photograph is the amazing Tommy statue, at nearby Seaham Harbour. There's something special about this piece of art and you really do get that vibe when standing next to the big man. The craftsmanship that went into this creation is there for all to see, especially on closer inspection when you can judge for yourself. I've photographed Tommy on numerous occasions, during different seasons, day and night, and in all weather conditions. 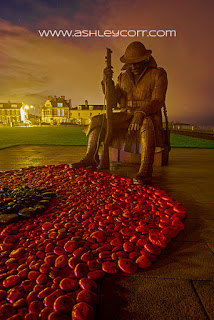 For anyone who is unfamiliar with the statue, Tommy sits thoughtfully, head bowed, rifle in hand, as he reflects upon the sheer horror of World War One during the first minute after peace was declared in 1918. This imposing metal sculpture, entitled 1101, owing to the fact the armistice went into effect at 11am on November 11, 1918, stands 9ft 5ins tall and weighs 1.2 tonnes. Built out of special corteen steel, it has been installed on Seaham seafront in Country Durham to mark the centenary of the start of the Great War.

Created by local artist Ray Lonsdale, the sculpture is also intended to represent Post Traumatic Stress Disorder which many of the returning soldiers endured. Mr Lonsdale got his idea for the piece after hearing a story about a soldier from nearby Murton who won a war medal. Tommy was originally on loan for three months to the former colliery town, but local residents instantly took him to their hearts and raised a massive £80,000 to make him a permanent fixture. He certainly put Seaham Harbour back on the map. 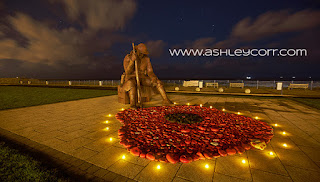 In the week running up to Remembrance Day 2016, an eye-catching display was laid out in front of the statue. Hundreds of hand painted pebbles were arranged in the form of a poppy, which is 18ft wide. The artwork is the brainchild of former serviceman Dave McKenna, who wanted to create something to link the statue to the town’s cenotaph. “We have had help from the cadets and Seaham Veterans group,” said Dave. The poppy will remain in place until this Sunday, Remembrance Day.“It is not a permanent, fixture, it’s just there for this week,” said Dave.

Once again my tea light candles made an appearance, and in such a fitting way as a tribute to all those who paid the ultimate price during warfare. Just as well these were battery operated lights, as it was blowing a gale during the ten minute photo session. I could see the waves crashing over Seaham Pier, in the distance. I drove down there to get a closer look, but the car park gates were locked. Maybe just as well - I was soon back in the car and heading home. Another job done ... 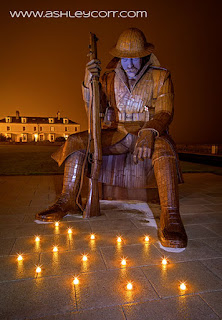 As the dust begins to settle on an amazing few days for Ashley Corr Photography, I'd like to personally thank everyone for their support following my recent photo upload here on Facebook. The photo in question was captured at midnight on Tuesday 25th August, 2015, in Seaham Harbour, County Durham.
The subject was Tommy, a corteen steel statue that was originally on loan to the County Durham town. The statue, by local artist Ray Lonsdale, was so popular that people in Seaham began a campaign to buy it, and after a mammoth effort, £60,000 was raised in a bid to secure permanent residence. The town council agreed to contribute the remainder of the £85,000 price tag before the deadline. The piece, called Mission 1101, known locally as Tommy, was inspired by World War One and is named to reflect the first minute of peace.
My brother Chris and myself headed over to Seaham in the hope of photographing Tommy, despite the rain. I recently had an idea floating around in my head that involved placing candles in front of Tommy, which would be so poignant and fitting that I just had to give it a go. Real candle flames wouldn't have stood a chance in such a breezy open space, coupled with the fact that rain threatened to spoil the party, so I decided to use battery powered tea lights which would give an identical effect to the shot, plus I wouldn't be pulling my hair our lighting one match after another to get them restarted. After a couple of minutes arranging the candles, it was time to let the camera go to work. As I dialed in the camera settings the rain kicked in once again, driving us back into my car that was parked nearby. I wasn't at all bothered about getting wet, but more concerned about keeping the camera and lens dry. Oh, go on then...truth was, I didn't want me mullet getting spoiled, he he. 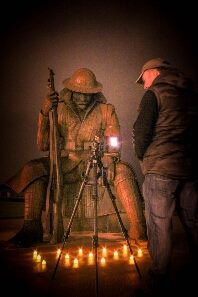 A few minutes later the rain passed and we set up stall again, only for the rain to fall again, heavier than before. Beat retreat to the car. At this point I considered giving the whole thing a miss, almost deciding it would be best to try again another night. Although the rain was against us, it actually played a massive part in what was to become my most popular photograph to date. The steel statue was sparkling in the rain and at that point I imagined those brave soldiers, like Tommy, who paid the ultimate price fighting for the cause, and how at times they fought in torrential conditions, such as heavy rain. It was at this point I decided I wasn't leaving without the photograph I wanted. It was in my head, exactly what I wanted, so it was up to me to capture it with my camera.
We've all heard the saying 'Third time lucky', well that applied to me as I set up my gear and placed the candles into position once again. The rain subsided and it was GAME ON. Tommy sparkled and the dry spots under his toe caps added a little extra to the shot, giving a strong impression of a very recent rainfall. There was no-one around, just me and Chris along with the odd passing car. As I finally got to trip the shutter, Chris took a photo or two himself, including one of me standing next to my gear. Within a minute or two we were out. Driving back to Houghton le Spring, I was quietly confident I had bagged the shot I wanted.
Without further ado, here it is...Tommy 1101, Candlelit Vigil...
The following day I posted the shot on 'Sunderland In Pictures' during late afternoon. My Facebook mobile phone app went into meltdown!!! As I was working a night shift that same day I went back to bed for a few hours in preparation for the slog ahead. When the alarm clock shifted my backside outa bed I went downstairs and made a coffee. I sat and looked on my mobile phone. To my amazement I learned that my Tommy photo had over 600 likes and many comments. Within another hour (11.10pm) it cranked up to over 900!! Break time at work (1.45am) the like counter had tipped over to 1360 likes. This was beyond anything I had achieved previously and way beyond anything I had expected when the candle concept entered my head. The response to 'Candlelit Vigil' was overwhelming to say the least.
The following day it went onto another level completely. The comments and likes were coming at a rate of ten per minute. The kind words were very touching and this was very satisfying. I was happy that so many people were moved enough to comment and send private messages of thanks. This meant a lot and I knew it meant a lot to others too. There were far too comments to thank everyone individually, so I made a point of thanking everyone on a few occasions in the comments column. Then a comment came in that was the cherry on the icing of the cake. The designer of Tommy, none other than Ray Lonsdale, gave high praise, sharing my photo to his own page 'Two rubber red things/Ray Lonsdale' and saying how it was up there with the very best photo's he'd seen of his creation. Wow, it doesn't come much better than that'.
Within a few hours the photo had over 500 likes on his page.
Skipping the chase, it's now three days since I posted 'candlelit Vigil' to Facebook. On Sunderland In Pictures alone it has over 4,500 likes and almost 400 comments. The 'Picture' has also been shared no less that 4,300 times!! Once again, thanks very much for the response to my photo, which has been very humbling. I take a lot of satisfaction most of all by sharing the photo, which in turn moved many people, not only from the North-East of England, but much further afield. It's a fitting tribute to all those who fought in conflict, especially those who paid the ultimate price. Lest we forget...
Posted by ASHLEY CORR at 11:15