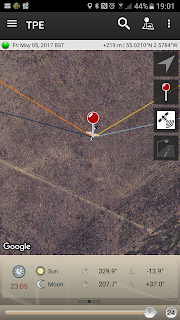 Following on from my last blog entry, this is the second part of the RAF Spadeadam trilogy - a night time visit under the stars. I'd been excited about a revisit since our first outing a couple of weeks previously. The thought of getting back into Cumbria to attempt a trail shot kept me ticking over nicely, whilst anticipating the drive west, over the A69 for more astro photography. As you can see by the BBC Weather screenshot from that day, clear skies was the forecast and a three quarter moon phase would help to light up the foreground. A second screenshot, also shown here, gives an indication of where the moon would be around 11pm, the time we planned to arrive on site . The position of the moon was perfect - ideally placed in the south west and directly behind where we planned to shoot from. The elements were on our side tonight. We arrived on time, as expected, then began to shoot our star trails. My brother Chris was alongside once again - there was on way I was heading here on my own. The site was open once again as we headed through the wooded area and parked next to the cattle grid - a ten minute walk to the abandoned Lockheed Shooting Star. 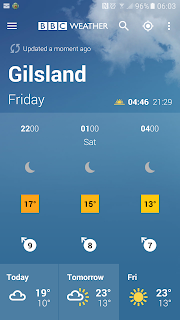 I was running with two camera's - a Canon 5D3 and the amazing Sony a7s mirrorless cam. I wanted to pull in two star trails, one portrait and one landscape, hence the use of two camera's. Lens choices on the night were Canon 16-35 f2.8 and a Samyang 14mm prime, also at f2.8. From memory, we were on site around 90 minutes, during which time it became increasingly colder, even though we could hardly feel it when we arrived. I reckon the task of negotiating the boggy access field warmed us up a tad. I'd opted for walking boots on this occasion, but the field wasn't anywhere near as dry as our first visit, so my got rather soaked and it was no fun standing in wet boots for an hour and a half.

Once we stopped the star trail sequence we ran off a few selfies before heading back home. It was a productive night and an enjoyable one too, despite the brass monkey bollocks I acquired on the night. All part of the fun I suppose, with hindsight. It didn't feel like fun at the time, he he. As well as capturing a star trail or two, I also put together a motion star trail from one of the sets of images I pulled in. The result can be seen on my 'Night Sky Time Lapse Compilation' which I uploaded to my You Tube channel. Click here to view it.

With the job done I was already planning to make a third visit to photograph the airframe under the milky way. This came to fruition a week later. Stay tuned for that - coming next. And on that note I shall vanish once again. Back soon folks. Cheers, Ash 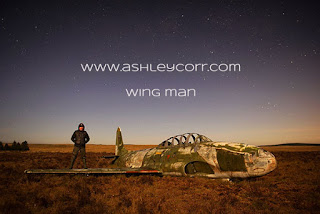 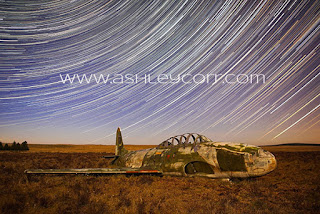 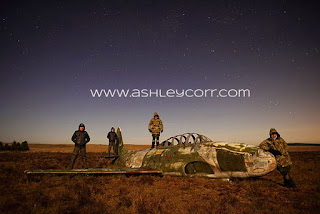