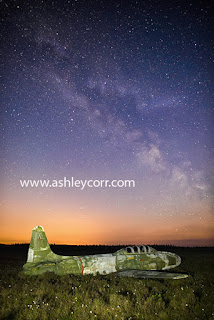 Welcome back once again to the final part of my RAF Spadeadam adventure. It was another journey west to the county of Cumbria to take in some more night time photography - this time I had Milky Way in mind, as a backdrop to the Lockheed Shooting Star airframe, on barren wasteland. By this point I had already done the customary recce visit, followed by my first night trip to attempt a star trail or two, so all that was left to tick off was the Milky Way, with its galactic core on show at this time of year. Another Friday night and another trek across the boggy field to the spot that I would spend an hour or so of my time before heading home. Naturally the conditions were favourable and clear skies were overhead once again. The elements were on my side, so it was up to me to finish the job off and get out of there.

On arrival we found 3 parked cars near the access field. I noticed one of them immediately - it belonged to Mike Ridley, fellow Nissan worker and astro photographer, amongst others. It looked like he had arrived before us, unknowingly of course. Once again I was with my brother Chris. I certainly wasn't gonna take this trip on my own. We headed across the field towards the aeroplane and we could clearly see torches wafting about in the distance. A few minutes later we reached the plane and I called out 'Mr Ridley' who replied (in a slightly worried tone) ... 'Who's that'. We were soon shaking hands before chatting and he introduced me to his two mates, Tom Hill and Dave Thompson. Mike said he saw us approaching and thought it was the police, ha!

The Milky Way was prominent, rising behind the aeroplane in an ideal position. Within a few minutes its position had changed quite a lot, so I quickly got to work and started photographing it before it was out of shot altogether. My choice of weapon was the Sony a7s, coupled with a Canon 16-35L f2.8 lens, which was more than capable. At around 1am the International Space Station flew over, but I wasn't shooting continuously so I failed to pull in my first ever shot of it. I managed to grab a 5 second exposure before it vanished. Another job done and ticked off nicely. I was only after one good shot and I got it. Amazing foreground and another enjoyable night out under the stars.