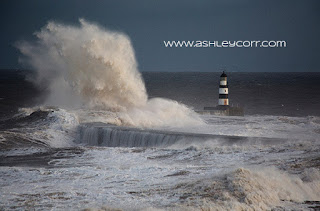 Almost a year has passed since my memorable visit to Seaham Harbour, County Durham, on a day when its pier was on the end of a rather nasty hammering by Mother Nature. The huge waves on that day were among the biggest and best I've ever seen, and it was great to have the camera over my shoulder, primed and ready for action. I remember the event as if it was yesterday. The kids running around on the windswept sands. The dog walker stopping in his tracks to watch the drama unfolding, much to the disapproval of his poor hound. The two canoeists, taking their life in their hands and battling against the incoming tide to manoeuvre forwards, between the harbour walls. Madness, to say the least. For the photographer it was one of those 'Box Office' events, as every minute that passed offered many photo opportunities. Capturing the moment unveiled itself many times over, so I couldn't go wrong, to be honest. 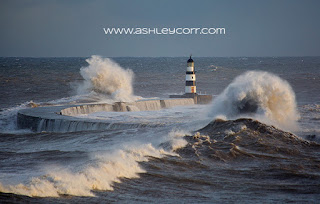 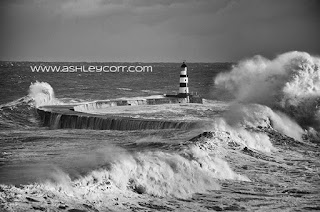 Fast forward 12 months and I'm having another crack at it, but this time the pier car park was locked and access was a definite no-go. Safety first - no argument there. I opted for a vantage point on a grassy outcrop, in full view of the Seaham Pier - a first for me, so I looked forward to grabbing a few shots from this angle. Around a dozen other photographers were in position around me within 15 minutes or so, some relying on tripods and others running handheld. I ran with both options, just for good measure. Wave after wave crashed in, all at different heights. You couldn't go wrong. I had an hour to kill, so I was confident of landing some keepers. It comes at a price though - the biting cold was nibbling away at my fingers, my feet, my face, and basically everything else, he he. Been there before though. Grin and bare it, I told myself. Suck that lemon and get on with it.

I had the company of Elliot Gowland, a fellow Nissan line rat and rookie photographer. I was passing on a few tips and he was pulling in some great shots as we went. His Mrs with us for a short while, before retreating to a warm car. One out of three of us has a brain!

Yes, it was a nice way to wake myself up after a week of working the night shift and feeling out of sorts. That North Sea air is one of the biggest wake up calls going. Here's a handful of shots from this afternoon's outing. No doubt I'll be doing it all again very soon, weather permitting.