A Night With The Stars - Terris Novalis 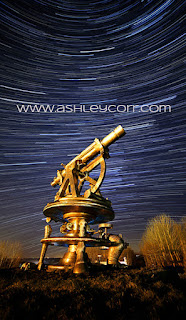 Sitting here on the sofa, telly off, can on, and another blog entry to pass the time away. Just as well I'm currently chilling out indoors as tonight's night sky is offering nothing to the amateur photographer, but not to complain eh - I've had my fair share of clear skies during the recent Xmas break. And on the subject of clear skies, it brings me nicely to the subject of tonight's blog write-up, my first night time visit to the Terris Novalis artwork, located in Consett, County Durham, a 25 minute drive from my base. In customary style, I've harvested a few words from my trusty old friend Mrs Google, which you'll find below in the form of a brief insight of Terris Novalis, cheers Mrs G ...

Terris Novalis in Consett was sculpted by Tony Cragg and won the Turner Prize. The sculpture is 20 foot (6 metres) high and is made entirely of stainless steel; it is 20 times the size of the actual surveying instruments. The sculpture symbolises the economic regeneration of the Consett area. It can be found on the Coast to Coast cycle route. 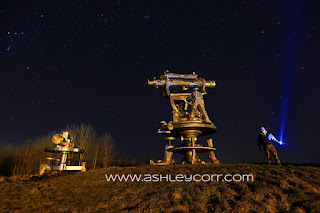 Late December 2016, a combined visit to Weardale, ending with a stop off at Consett to photograph the starry sky above Terris Novalis, which is situated just outside the town centre. As you'd probably gather, dark night skies and built up areas aren't a good combo, especially when you're relying on as little light pollution as possible to make those little sparkly things look as prominent as poss. On this occasion I made the most of what was in front of me, which is all you can do as a photographer, so the final position of the camera was vital in pulling in some acceptable results. The actual sculptures are positioned perfectly for astro photography, it has to be said. The most photogenic angle has street lighting to my back and fields in front, without surrounding light. Perfecto! 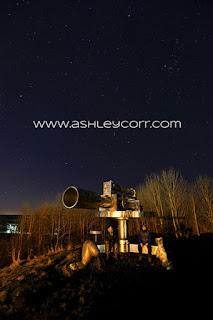 Running alongside the sculptures is the coast 2 coast cycle path, so visitors could show up at any moment, despite it being very dark and very cold. Oh aye, me clackers were feeling the pinch alright, make no mistake of that. Hopefully no-one would interrupt tonight's star trail with guiding lights. We'll see eh, sods law and all that jazz. And away the camera went - click, click, click ...

Nowt to do but stand around getting colder. I had my brother Chris along with me, doing pretty much the same thing, so company was at hand, which is a godsend when you're standing there twiddling the owld thumbs. Ten minutes in and two young girls, no older than 15, came waltzing by, supping blue WKD. They plonked there arses on one of the sculptures and sat there for a good hour. Typical eh. Then their mobile phones came out and they were waving them about in front of the camera, giggling their arses off. Looks like I 'll have to stop the camera, eh!!!!! One of them asked if I was taking photo's - I felt like replying "Why Like, are you taking the piss" 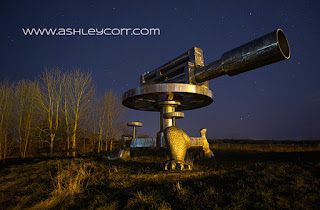 Anyway, when they buggered off and we regained our territory, the camera had been running for an hour or so. Time to switch off and head to Consett main street for a bit of scran. Tonights supper - Kebab meat and chips, with garlic sauce and EXTRA CHILLI. Now, this gear warmed the cockles alright. Oh yes, this was hot stuff and I just knew instantly that me jaxey would resemble the Japanese flag the next morning. But hey, the scran was rather damn tasty to say the least, so let's forget about tomorrow morning's nuclear 'Fall out' eh. Just savour the flavour. Delicious!!! These road trips with the camera always involve a takeaway at some point, and why not, it's a nice way to round the night off before heading home to put the feet up and pour a glass of cold lager down me Gregory Peck. There is every need to over indulge, and why not - it is Christmas after all!

It wasn't long before I was dropping Chris off at his place then heading back along the A690 to AC Towers. That tin of lager was calling out my name and it time to put it out its misery. Tonight was a good one, very productive in more ways than one. It won't be too long before I'm back to work, so best enjoy what's left of the Christmas break by planning some more nights out with Mr Canon. The show aint over yet. January can wait, for the time being at least.

Thanks for reading my prattle. There's plenty more where this came from. Cheers, Ash
Posted by ASHLEY CORR at 13:40