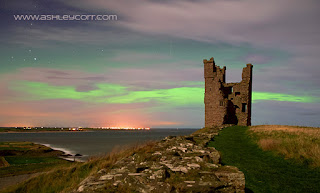 18 months ago, whilst on holiday at the Isle Of Wight, I decided to try and photograph the Milky Way. When I say try, it’s because I hadn’t previously attempted this type of photography, known as Astro, so my first objective was to locate the Milky Way and then set about capturing it with my camera. Until this point I had never seen the Milky Way – I had only seen very recent photographs of it during a brief research earlier in the afternoon.  At the time, during the Summer of 2014, the Milky Way stretched across the night sky from South to North, so I decided on a location to head to and set about the task of photographing it. The night in question will always be a one to remember, especially when I first saw the Milky Way for the very first time, in pitch black conditions, which was ideal as it stood out like the proverbial sore thumb. Photographing it was a lot easier than I had imagined. Infact, the hardest part of the whole experience was keeping my nerve, as the location was out in the sticks and under a blanket of pitch darkness, but I got the shot I wanted and that was very satisfying. And that was my introduction to Astro Photography, the night it all started for me and which continues to this day. 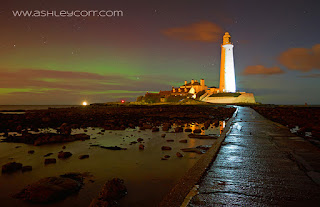 Astro Photography has lots of strings to its bow and it can be quite addictive, especially Aurora chasing, which I’ve been doing for a year, since my first sighting on 29 December, 2014. This brings me nicely on to today’s blog entry – another Aurora chase on the Northumberland Coast, almost a year to the day when I first saw the Northern Lights with my own eyes. In the hours prior to our road trip north on the A1(m), my mobile phone received lots of Aurora alerts through an app I have installed on it. A CME (Coronal Mass Ejection) had fallen from the sun two days before and was earth bound, which in turn causes the natural phenomena known as Aurora Borealis (or Northern Lights). The strength of the magnetic storm is measured in KP units and a reading of between 4 and 5 is usually the least you need to be able to view the lights from the North-East coast of England. Other factors need to come into play too, such as BZ, a reading which is created by waves and other disturbances in the solar wind. The further south the BZ reading is, the better chance of a display. Today the Aurora forecast was KP8 and the BZ was as far south on the dial as it could be. I’d never seen a forecast as strong as this so I wasn’t gonna miss an opportunity to get involved.

We arrived at Craster at 6pm and headed across the pastures to Dunstanburgh Castle, an ideal location looking North, in the direction of the Aurora. Clear skies had been predicted on the Met Office app, but by the time we reached the castle a huge cloud bank was heading our way. Not in the plan at all. A green glow could be seen in front of us and it was quite high in the sky – much higher than I’d seen before. It was very windy upon the crag where Lilburn Tower is perched and the winds got worse as the night wore on. A steep drop to my left wasn’t an ideal place to set up shop, but the vantage point was the best I could find considering a few other photographers were in place alongside us at this point. Over the next four hours we waited for the clouds to disperse, which they did to some extent, but as they headed north it was the last place we wanted to see them. Any colour that was on display was clouded out and before long we were closed down altogether. The plan was falling apart and although those mad KP alerts kept on coming through, the clouds made sure we had little or no chance of seeing the display we had earlier expected. Home time. 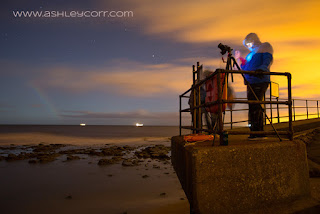 After the 30 minute walk back to the car, feeling somewhat deflated, I reflected on the one decent shot I managed to pull in (see above). Not a great display be any means, but at least I got something for my efforts. The night wasn’t a complete cloud-out however. We decided to stop off at St. Mary’s Lighthouse, Whitley Bay, on the off chance that the Aurora may still be firing closer to home. It was around midnight when we arrived and a green glow could be seen behind the Lighthouse. The tide was incoming and the late night display had brought plenty of photographers to this location, eager to catch a few shots of the display. A Lunar Rainbow could be seen next to the Lighthouse, which a first for me, so I quickly grabbed the opportunity to photograph it before it faded, which it did in a matter of seconds. We spent a couple of hours at St. Mary’s, hoping to see an upturn in fortunes, but the Aurora never really got out of second gear the whole time we were there. Again, I grabbed what shots I could before calling it a day, or night in this case.

The night had so much expectation riding on it, but looking back now it was a big disappointment. Maybe I expected too much, but then again… when a KP8 forecast comes through, along with a weather forecast of clear skies to the North…well, you can’t help but get drawn in by it all. Experience tells me that most Aurora chases often turn out to be a waste of time and effort. The best ones I’ve been involved in have been very much unexpected, so you learn to simply go with the flow, cross your fingers and hope you hit lucky. You win some and you lose some, it’s all part and parcel of the game. I suppose that’s what half the attraction is. I wouldn’t change it if I could. The expected or unexpected? It is what is. I’ll keep on chasing (wink).

Until the next one…