CASTLEHAVEN COVE (12th September, 2020)
As coronavirus played havoc on our everyday lives, what turned out to be a cancelled holiday to a Greek island, turned out to be a week long holiday on another island. From Santorini to the Isle of Wight... 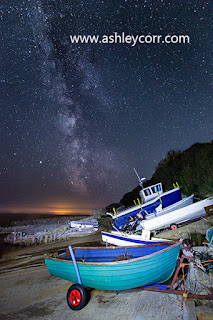 After the disappointment of learning that our Santorini holiday in mid-September had bit the dust, my wife suggested we book another holiday on home shores. Not wanting to waste an opportunity to get away, we booked a caravan holiday in Newbridge, on the Isle of Wight. The island had been the destination for many a previous family holiday, beginning in 2003, when our kids were young enough to enjoy everything the island had to offer. In fact, this was the place where I saw, photographed and edited my first ever milky way, back in 2015. I remember the night very well and it began what was to become a completely new genre of photography to me. I remember standing in awe, looking at the milky way on a clear, moonless night, with the smuggler of Blackgang Chine in the foreground. It really does seem like yesterday!
And here I am again, back to this small island - an amazing location for dark sky photography. And luck was on my side once again, as I just happen to visit during a full week of clear, moonless skies, once again. Well, an opportunity to walk those night time paths was here again and even better that it is September, when the sky would be dark enough to photograph at 8.30pm!!! September is traditionally one of the best months to photograph the milky way, as the galactic core is visible in all its glory at this time of year, so photogenic opportunities were in abundance. 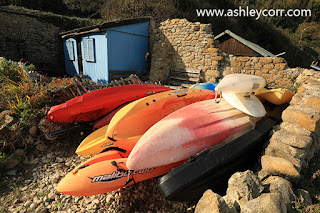 My first night of astro took place at a small fishing cove near the southern tip of the island - Castlehaven. I'd done my research earlier in the day, as my wife and I drove down to St. Catherine's Lighthouse, before walking along the coastal path to nearby Castlehaven. We walked through a small caravan park that overlooked the sea, before arriving at the small cove, which we had to ourselves. I scouted the place out, realizing there and then that it was an ideal spot to photograph the night sky, facing south-west, towards the milky way. There was a few small boats dotted about, which would add good foreground interest, so I bookmarked the place in my mind, before we headed off to the nearby Buddle Inn, for a well earned drink. The dirt track up to the pub was very steep and bumpy. I knew I'd have to drive back down this road later on, in pitch darkness, but it was the only access road to Castlehaven Cove, so it had to be done. 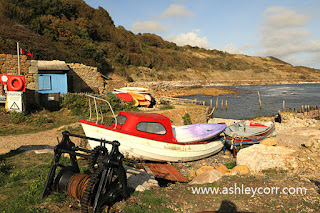 A few hours later, I was in the car and heading back to Castlehaven. The dirt track to the cove was every bit as bumpy as I'd expected. What an experience. It was like riding one of those mechanical bulls you often find in foreign pubs. Oh aye, I got flung all over, even at 10mph. Not a soul around. I eventually parked at the bottom of the track, next to three other cars. I made my way down the very short ramp towards the cove, with the help of a handy Poundland torch to light the way forward. I switched off the torch and allowed my eyes to adjust to the pitch black conditions... and it was as dark as I'd ever imagined...but what a night sky....amazing!!!  The milky was was ideally positioned, so I quickly scouted out a position behind a few small boats, knowing this would offer a good composition with interesting foreground. The waves lapped in slowly and the temperature was a welcome 16 degrees. I was still wearing shorts and t-shirt! 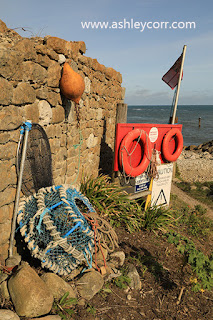 I must have only been at Castlehaven for a matter of ten minutes or so, grabbing the shot I wanted, before heading back to the car. I was mindful that I still had to get back up that bank and out of there. If anyone else had parked up on the bank I was knackered - no way out. Luckily enough I had no real problems in negotiating a quick exit, so the night had got off to an excellent start and it was only 9.30pm - still time to head off to more locations, for those elusive astro shots!
I was hoping to fit in Blackgang Chine Adventure Park, before finishing off at Compton Bay Car Park, for a spot of car photography. One of three planned visits was now in the bag...let's get to Blackgang Chine, for more of the same...and to tick off location 2...
Coming next (stay tuned!!!)
Ash