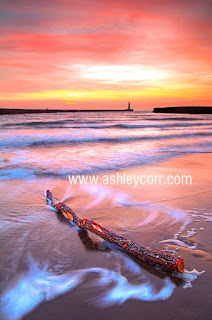 A rare sunrise outing for Mr Corr, on a chilly February morning in the north-east of England. I'd just finished a week of night shifts at the Nissan POW camp and my body clock was again out of fettle, as I woke at 5am and joined the wide awake club once more. With hindsight, I suppose it worked out quite well, as I bagged a decent shot or two - the first shots I 'd actually taken for a number of weeks and my first of 2019. I'd been out of the loop, due to illness and one or two other personal issues, so it was nice to get  back on the horse, so to speak, although I did feel quite rusty and almost had to remind myself how to use my camera ha!

So off I went, slipping back into the photography loop, with a ten minute journey eastward, to Seaham Harbour. I had no real plan, to be fair. It was another one of those 'Suck it and see' affairs, where I drive, observe, then choose. The choice wasn't a great one either, as I had two locations on my radar. My first choice was the harbour beach ... the second was the Tommy artwork, on top, at The Green. With sunrise in mind I checked out the sky for inspiration and a clue as to which location to plump for. The harbour won the day, so I headed down the bank and through the overflow car park - eventually reaching the pier parking area, where I dropped anchor. The tide was almost high and with the sun about to rise, I wasted no time in getting sand on my wellies and into position. A lump of driftwood drew me in immediately. It was ideally placed and looking very photogenic, for what it was. I began to feel that things were already piecing together and the prospect of some colour appearing in the sky was very promising. It was now a short waiting game... 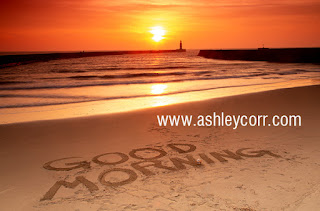 I didn't have to wait long to be rewarded. It was a great start to the morning and the pastel shades suddenly appeared in the sky, with the incoming tide lapping against my driftwood prop. To my right hand side I was distracted by a man with a dog … and a short rake. Ah well, he obviously likes his props too, eh. It's just … he wasn't a photographer as such, just a man walking a dog. So why the rake, I asked myself. Not to be distracted any further, I turned away and fired off a couple more shots. The scene unfolding in front of me was rather special!

I looked across to my right once again and noticed said dog walker crafting something in the sand, with his beloved rake. From the angle I observed from, it wasn't easy to see exactly what he was writing, but all became apparent as I stood and watched him taking a photograph of it on his mobile phone. GOOD MORNING … was his greeting in the sand. Well, as I packed up and headed back to the car I grabbed a quick shot of his work, just for the record. I really do need to thank him, as my photo of it appeared on the Tyne-Tees Television weather bulletin later that day! 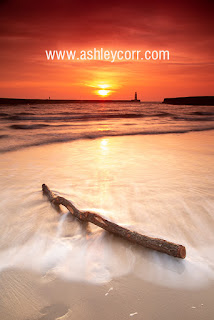 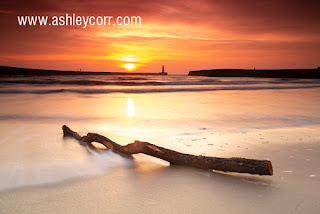 All things considered, this morning was a return to my photography after a four month exile. I have to say … it was a nice return, which yielded a decent shot or two. I really need to get back into the seascape scene... especially sunrises. If only there was a way around the early morning alarm calls, eh. Now, that would be ideal. I'll just have to make more of an effort to drag me jaxey out of the fart sack more often. Until then …

Catch ya sooner, rather than later.