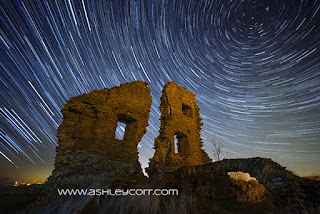 And it's more Astrophotography on a freezing cold, blustery night in County Durham. I finished work at 11.20pm and drove to Spider Towers to pick my brother up. We were heading over to Ludworth Tower - a fifteen minute drive from Gilley Law, Sunderland. The plan - to photograph Ludworth Tower under the stars. Aye it was well chilly, but we were well layered and prepared for a couple of hours out in the sticks. The beauty about this location, especially in sub zero temperature, is the privilege of sitting in the car as the camera works its magic. I dropped anchor at the kissing gate, where access to the tower is at hand. From there it's literally a 10 second walk to the tower. Once in position we set up our camera's and walked back to the car. We sat there for an hour or so, listening to the radio and keeping out of the cold. There's not too many locations where you're afforded that basic luxury when photographing the stars, but this was definitely one of them. 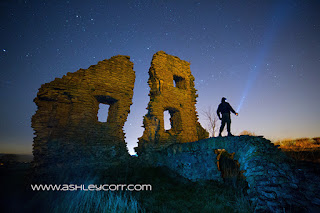 Ludworth is a pit village in County Durham, England situated between Durham and Peterlee. It consists of just over 350 houses in three main housing estates (Barnard Avenue, Moor Crescent and Springfield Meadows) and a few smaller streets. Ludworth has one post office, a school, a community centre and a printers. The village used to have two churches and a fish shop, most of which were destroyed in a fire. The public house of Ludworth has been closed for some years.
Ludworth Tower was originally a medieval manor house, founded by the de Ludworth family. In 1422, Thomas Holden added a rectangular pele tower, when he was granted licence to crenellate his manorial complex, by Cardinal Langley. The only surviving remains are the barrel-vaulted basement, the three storey west wall and fragments of a first floor spiral stair in the south wall. The remains can be seen located on the left as you are coming into the village from Shadforth.

As well as running off a start trail sequence I finished off with a single exposure of my brother Chris, standing on the ancient arch next to the tower. Here is both shots from that night ...