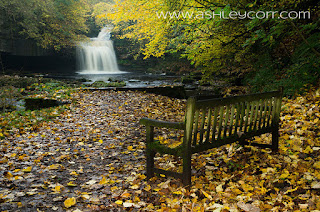 A continuation of the Autumn Waterfalls theme, following on from my last post a few days ago. Part 1 was by no means a classic as far as waterfalls go. The installment was merely an introduction as to what was about to follow, so without further ado, here is a small selection of picturesque waterfall shots that I enjoyed capturing in a fantastic setting. West Burton is a jewel not to be overlooked. Situated in Upper Wensleydale, which is part of the Yorkshire Dales National Park, it is the home of Cauldron Falls, one of the waterfalls drawn by Turner, on his tour of the North of England. 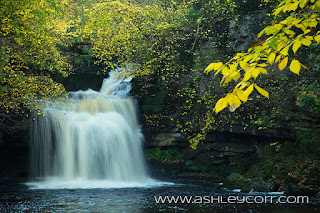 I parked next to the village green and walked back down to the entrance, basically heading towards the noise of the waterfall. Well, that's one good way of finding it, especially when it's your first ever visit and there's no-one around to ask directions. A narrow opening between the houses leads you into an almost fairy tale scene. With the Olde Worlde village now behind me, it was almost like stepping from one chapter of a book into another, or even onto a period drama film set. The timing of my visit couldn't have been better, as the floor was littered with Autumn leaves of various colours, with many more falling from above as I walked further into the scene. An old stone bridge guards the entrance to the falls and it's about as picturesque as you'll find, with the fast flowing water travelling through its arch an down an incline. A group of photographers stood around the bridge, capturing the dramatic water at speed as I walked past. 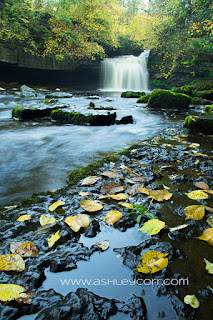 An old wooden bench was situated under the trees on the approach to Cauldron Falls. It was here that I took my first shot of the falls, kicking off with a 1 second shutter speed as a test. It was spot on, so I ran with that and an aperture of f11 at 100 ISO for the rest of my exposures during the one hour session. I was tempted to head over the stone bridge to capture a different angle on the falls, but to be perfectly honest, I was more than happy to work from one side of the river as the photo opportunities looked much better, with rocks, water cascades and overhanging autumnal tree's offering everything I was looking for.

Summing up my visit - this really was a one to remember. Up til this point I hadn't taken any Autumn shots in 2015, so there would be no better place to start than Middleton in Teesdale, with an encore at Cauldron Falls, West Burton. It doesn't come any better than this. One place I'll definitely be revisiting in 2016, make no mistake of that.
Back soon...
AC