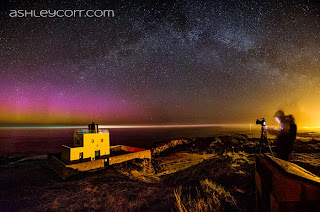 Hello again and welcome to another blog entry. I've been looking forward to writing about my recent sighting of the Northern Lights, also known as the Aurora Borealis. After a brief showing back in December 2014, I was hopeful of catching a better light show before the end of the Aurora season, which is normally in late March. There had been a handful of decent Aurora activity since December, notably the big one on St. Patrick's Day, but sods law kicked in and I missed them, mainly due to work commitments, and not for the first time either. So, when a predicted forecast of Aurora activity was on the cards in late April, I decided to push the envelope and get myself up the coast to photograph it. As it happened I was working until 11.20pm on April 20th but that wasn't going to stop me making the 130 mile round trip, even though I was quite knackered at the end of my shift. The opportunity was too good to pass, especially as the aurora prediction also coincided with clear skies and no moon, which are ideal for this kind of photography. So, with everything in place, it was all systems go! 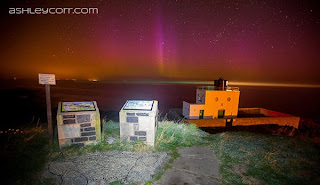 I made the journey north with work colleague and friend Ryan Pearce, who like myself has only been doing Astrophotography for a few months. We were both excited as to what the night had in store for us and we weren't disappointed. After an hour or so on the road we were soon in position with our cameras at Stag Rock Lighthouse, Bamburgh, on the Northumberland coast. This was the same location as my first and only sighting of the Northern Lights, so we were more than hopeful of a good light show to reward us for our efforts. Pointing our cameras in a northerly direction we fired off our first test shots to see if we could pick up any activity. Bingo! A magenta cloud was fairly prominent on the horizon and what a start to the night that was. Soon we could see small spires and they shifted fairly quickly to the right, along the horizon. The spires got bigger and more appeared as the minutes passed. To the naked eye they appeared as a grey hue, but the long exposures that the camera pulled in showed them as bright green and magenta. I ran off a time lapse sequence whilst watching the dancing lights, which consisted of around 80 x 20 second exposures.

The Milky Way was very prominent and stretched across the sky between the Aurora and Bamburgh Castle. I was hopeful of bagging a shot of the full vista in front of me, although the vast expanse would only be achieved by taking several shots and stitching them together in Photoshop. The photo at the top is the result of taking 14 exposures and letting Photoshop do the rest. Once stitched I edited the image, which took around 15 minutes to complete. I would say it's one of my best shots to date. This time last year I didn't even know what the Milky Way and Aurora looked like, so to grab myself a shot like this meant a lot. A rare phenomenon!

The lights danced on the horizon for two and a half hours before an orange glow began to appear. Yes, the sun was on its way. We left Bamburgh at around 4.15am and headed home. Job done. This was a memorable night, to say the very least. I have compiled a time lapse video of what we saw on this eventful night and it can be found on my website. Visit ashleycorr.com and head off to the TV page where you will find the 2 and a half minute footage. Alteratively, if you have access to a Smart TV, go to the YouTube app and search for 'Bamburgh Aurora'. The search results will show the thumbnail image with my name next to it. The video has been produced in High Definition and I'm sure you'll enjoy it. It's only my first attempt at this kind of thing, but I think I done ok. And that's about it. Hope you enjoyed this blog entry. Cheers, Ash