My First Shots Of 2011 - Newcastle Quayside

Happy New Year!
As we enter a new year and a new decade I hope to bring you more photography 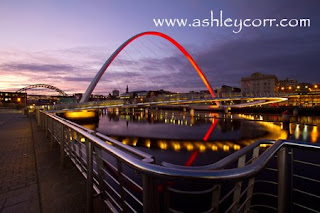 from the North-East of England, a place that's full of opportunity behind the lens. Being born and bred in Sunderland, and a keen supporter of the 'Red And White Army', my affinity with Newcastle is almost non-existant, especially where football is concerned. However, as an amateur photographer who partakes in plenty of low-light photography, Newcastle Quayside is one place that is hard to beat when it comes to subject matter. Directly opposite, on the south side of the River Tyne, is Gateshead Quay's, which also offers an abundacnce of photo opportunities. It is on this side of the water that you'll find the Baltic Arts Centre & Sage Gateshead. Looking up the River Tyne you're presented with a series of bridges, which include the Tyne Bridge, Swing Bridge, Redheugh Bridge and Railway Bridge.

Arriving at the Sage car park at 4.20pm, I was set up a few minutes later near the Baltic Arts Centre. The sun was down but there was still plenty of colour in the sky, just where I wanted it, behind the imposing Tyne Bridge. From here I took this first shot of the Millennium Bridge, glowing red before it changed colour every few seconds. The sky was just right - something that's been lacking these past few nights.

It wasn't long before I was standing on the Millennium Bridge and photographing up stream, towards the Sage Gateshead and Tyne Bridge.

A four second exposure captured this second shot (shown here), with a brilliant sky offering the perfect backdrop. I really like this shot, as the subtle colours in the sky sit nicely behind the silhouetted Tyne Bridge. I purposely lost some of the sky and water in post-processing to give a tighter crop, which improves the overall image. The shot is now finished in a panoramic format and looks much better than the original uncropped composition.

As my first shot was taken at Gateshead Quay's, 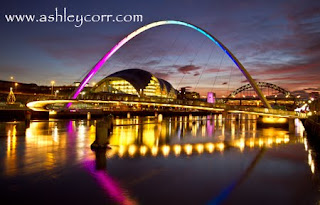 followed by one in the middle of the river (on the bridge, I hasten to add), there was only one place left to photograph from. So, my third and final shot in this blog entry was captured across the water on Newcastle Quayside, near the Pitcher & Piano pub. The Millennium Bridge was now changing colour every ten seconds or so, on a repetative loop, from yellow, green and blue, through to purple and red. After a few repetitions it then changed to a variety of colours, in a kind of 'Rainbow' formation. Each colour was thrown out by separate spotlights at the foot of each side of the Millennium Bridge. It certainly made for a great shot!

This place has plenty to offer the photographer. I intend to revamp my 'Newcastle Quayside At Night' page on my website in the next two or three weeks, as I intend to replace some of the images on there with brand new ones. The new stuff will be photographed very soon, as I'll be making a few more journey's to the Quayside in the next few days. This will be all low-light work, although there's a possibility of some daytime shots thrown in for good measure.
And that's about it for now, folks. I hope you like my latest shots, I'm very pleased with them myself. The Canon wide-angle lens comes up trumps again! Thanks for visiting my blog, and don't forget to bookmark my web site, where I will be performing the usual regular updates.
Until the next time, night night all!
Ash
Posted by ASHLEY CORR at 22:15